2006 proved to be an excellent season for the club. It started wet and the performances on the field seemed to match the weather but as the weather improved so did the quality of play and in spite of a wet August the momentum was maintained.

The Saturday 1st XI came a very creditable third place in the first division of the Surrey Downs League and the 2nd XI did well to avoid relegation by what turned out to be a fairly comfortable 29 points. Individual performances can be seen in the statistics section but having lost several first team players it was gratifying to see a number of players working hard at their game and as a result they showed much improvement. It was also good to see so many young players taking their places in the senior sides. Both Matt Jee and Peter Edwarde scored their maiden senior half centuries.

The two Sunday teams and the Midweek team enjoyed full fixture lists with a number of exciting games. The 6-a-side competition was a great success as was the special ‘old’ Newdigate versus ‘current’ Newdigate match in which many old faces were seen on the Brocus.

In July the club was invited to appear on Sky TV’s ‘Cricket AM’ programme. James Penfold became an overnight TV personality ably backed up by Dave Puddicombe – thus the club received some unexpected national exposure.

On the August Bank Holiday a match was played at Hambledon, the cradle of cricket, and in September the club reached the national finals of the Sports Wise 20/20 competition when they lost to a very powerful Upminster team at the splendid surroundings of Uxbridge Cricket Club.

There were about 75 registered juniors and all age levels played in the East Surrey Colts League. The under 11’s and under 13’s both came third in their respective divisions and Jack Wyllie represented Surrey at his age group, the first Newdigate player do have achieved this honour since Richard Callcut played for Surrey U19’s in 1995.

The under 11’s lost in a tense final of the Capel 6-a-side competition by one run to Sanderstead – a splendid effort in view of the caliber of clubs competing.

A group of youngsters attended the first day of the test match against Pakistan and another larger group went to the Oval to see Surrey play Yorkshire. Thanks to Surrey CCC for arranging this.

In September, Andrew Kehl was selected to represent the President’s XI to play against the under 9 champions, Caterham. Bowling with an ‘incrediball’ he took a hat-trick. This is a remarkable achievement at any time but to do this against the league winners was truly amazing.

The club continues to maintain close relations with the County. In April eight players attended a six weeks course under the Russell Haigh bursary for one to one coaching at the Surrey Cricket Centre and in December six youngsters attended a course for promising players not currently in the existing county set up.

It is good to see that the County acknowledges that it is possible for players to miss the net and to offer this opportunity. Let’s hope the boys played well…. 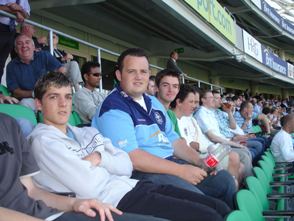 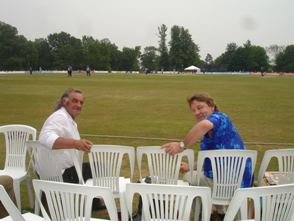 Dave Puddicombe and Nick Crawford at Arundel- Sam Slade, Craig Jones, Saul Gabriel and Will Bowley at the Oval