This was one of the wettest seasons in living memory and the season finished with a general feeling of what might have been, but overall it must be viewed as a successful summer as the club has moved forward in many directions. 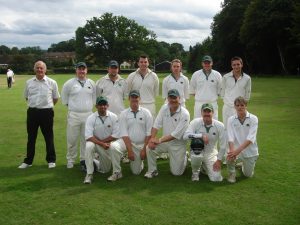 If the Saturday 1st XI had won their final match against Brockham Green they would have become champions of the Surrey Downs League. The game was lost and the honours went to Brockham who are worthy and popular winners having seized the coveted number one spot on the last day of the season from third position, as both Westcott and West End Esher also lost.

The 2nd XI faded after a promising mid season spell and ended in fifth place, but due to restructuring of the league they will get promotion into the second division. This will be tough as there will only be two second teams in that division.

The Sunday 1st and 2nd XIs had enjoyable seasons with the 2nd XI proving to be a springboard into senior cricket for the emerging young players. The ever popular midweek side played in some pretty miserable conditions but nevertheless enjoyed many good matches.

For some, the season was dominated by rain and grey skies, but for one player it will be forever a golden summer. Ruky Wickremasinghe had the season that many can only dream of. A club record of 1674 runs at an average of 50.73 including five centuries. One of those centuries being against a strong Claygate side when he compounded their misery by taking 7-28!  Well done Ruky. After a poor start, Matt Ross relinquished the captaincy and he immediately came back to form and scored two centuries. Simon Capel scored a century and Matt Jee will also always remember his maiden century in a friendly against Sutton. Only last season we were congratulating him upon his first fifty.  Congratulations must also go to Hiten Patel whose batting came along in leaps and bounds. He top scored with 89 not out but this was backed up by a consistent run of good scores.

Will Bowley, having put a poor 2006 season firmly behind him, topped the bowling averages and took 55 wickets. The best performance though was Richard Callcut’s. 5-8, in a friendly against South Bank. 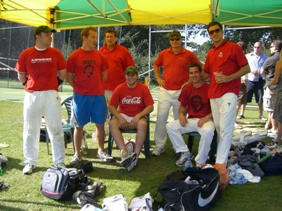 The Peter Clark Memorial 6-a-Side was well attended, as was the match against old Newdigate.  The cricket week was better supported and this included a good bank holiday fixture against a strong Littlehampton side.

There were over ninety junior registrations and the youngsters have enjoyed regular coaching and matches throughout the season. A visit to the Oval, the Capel 6-a-Side, and a parents–versus-junior match were amongst the highlights. The junior section represented the club at Village Day in September by inviting visitors to bowl against them in the mobile net.

The juniors play in the East Surrey Colts League where the under 9s finished in 9th place, the under 11s in third place (a win against Capel in a nail-biting match would have made them champions), the under 13s gained a first-half promotion from division two and then maintained their status in division one, and the under 16s came third.

Jack Wyllie represented Surrey under 11s which is a great honour for him. Good luck Jack and well done.

Eight boys participated in the coaching sessions under the Russell Haigh Bursary and attended the courses at the Surrey Indoor Cricket School at Burpham in April.

Thanks to grant money from the Lord’s Taverners, Awards for All, Playing Fields Association, the Gatwick Community Trust, the Surrey Cricket Trust and the Mole Valley Sports Council the nets have been refurbished and Flicx wickets and the mobile cage have been purchased. 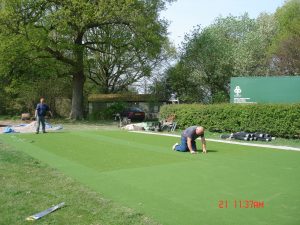 Relaying the nets in April 2007 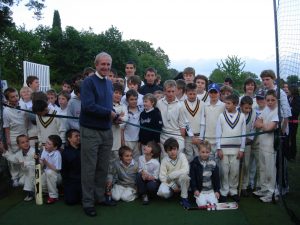 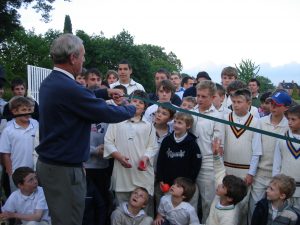 During the summer the club has achieved the ECB Clubmark Accreditation and the bronze, silver and gold awards from Active Surrey. This means that the club operates in an equitable way without prejudice regarding race, colour or religion and, most importantly, in a safe environment. The club also featured in the Wisden Cricketer Magazine when it was named as the Gray-Nicolls Club of the Month for July. 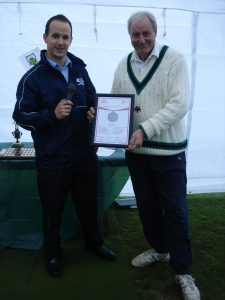 Over the course of the year, Martin Clabby has been working on the club’s website. It is now possible to read the match reports as and when they are written and keep up to date with your averages on the ‘play-cricket’ website. Anita Threader and James Scowen have worked hard on producing a player data base for both adults and juniors which should lead to improved communications amongst members.

In the Autumn we had sample cores taken from the square which showed that the grass growth was better than expected. Nevertheless, during the Autumn preparation a deep scarifying was undertaken and around 25mm taken off the bowling ends to lessen the slope up to the wicket. We then had just the right amount of rain and sunshine which has resulted in the grass growing better than ever. In November the square was spiked and further de-worming has taken place.

We were blessed with good weather for the bonfire night although the attendance was back to normal after a bumper 2006.

We had a new venue for the dinner and dance at Wotton House. which was extremely well attended. There were a few problems which we expect to be ironed out for next year, but overall a good time was had by all. 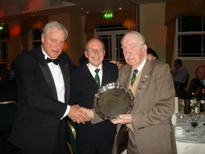 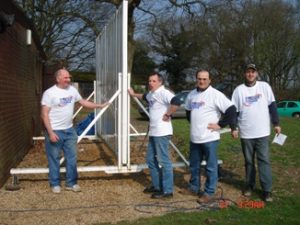