The last game of the season saw cold winds and rain swirling across the Brocus which was in stark contrast to June and July when the pitch turned from green to brown and back again to green as the rains returned in August and September. We had some fantastic matches played on true pitches which often yielded a thousand runs over the weekend. The batsmen were in fine form scoring a total of thirteen centuries which is a club record.

Once again the 1st XI came runners-up to Westcott in the Surrey Downs League in a finish that went right down to the wire. Seventeen years old, Matt Clarke, had a memorable season scoring over 1000 runs and hitting his first century. Richard Callcut also scored over a thousand runs including no less than five centuries. Once again Ben Crook was our main strike bowler taking 80 wickets ably backed up by Allan Cooper and Ruky Wickremesinghe who also passed the 1000 runs total. 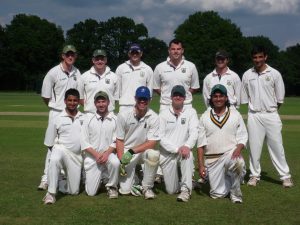 Our 2nd XI consolidated their position in the league and ended up in mid table. 15 years old, Jack Wyllie opened the batting throughout the season and scored several half centuries and the reliable Paul Bettesworth scored two important centuries. The side would have benefited, however, from a more regular bowling attack which at its full strength could be pretty potent. 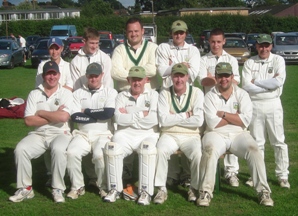 For the first time a 3rd XI had a full fixture list and it was great to see a number of our young players making the jump into senior cricket. Fraser Mosley, Stephen Kehl, Thomas Ball, Henry Warne and Cameron Osborne, all products of the coaching scheme, recorded their maiden half centuries in adult cricket. 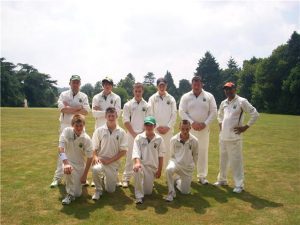 On Sundays the 1st XI had a fine season playing good quality clubs. Our Surrey Trust Development League team, which consists of at least six players under the age of 18 came fifth, but only a couple of points behind the second placed team, Alleyn & Honor Oak. This competition sees the club playing against Championship sides and if they could have beaten Chessington, whom they got out very cheaply, then the runners-up spot would have been secured. 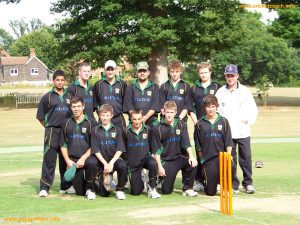 The Sunday 2nd XI had a mixed season, but skipper, Sam Slade led from the front scoring three centuries. The mid-week team had a successful season winning more games than they lost. A particularly enjoyable match saw the mid-weekers take on the juniors in a twenty over match – we won’t embarrass the adults by saying who won! In May, Graham Capel celebrated his 70th birthday and a special match, consisting of mid week players, was arranged in his honour. 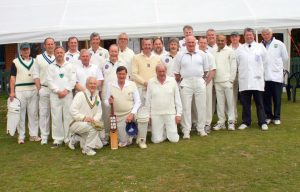 Another special event was when John Callcut and Bill Turner held a special cricket match in September to celebrate having played cricket together for over fifty years. 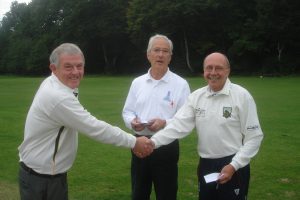 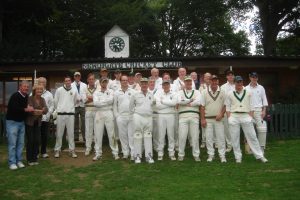 We have a well established junior coaching scheme with over 90 registrations and ten qualified coaches who are backed up by regular assistants. 50% of the youngsters actually come from the village. This year we had several players representing Surrey Central District at various age groups and Harry Ramsey must be congratulated for being selected for the full Surrey Under 15 side. This Autumn put forward twelve juniors for assessment by Surrey and once again eight juniors will be selected to participate in the Russell Haigh Bursary at the Surrey Cricket Centre next Spring. This season we ran teams at under 9,11,12,13 and 15 levels in the East Surrey Colts League so there was plenty of cricket for everyone. Highlights were when the under 11s lost in their cup final to Southern Rail & Kenley and the under 15s, who won seven consecutive matches, would have won their league if they could have beaten Woodmansterne in the final match. They lost a desperately exciting game in the closing overs. We entered a team in the Dennis Jacobs Cup for under 17s and lost in a thrilling match against Reigate Priory which witnessed Matt Clarke hitting balls as far as the hedge around the bowling green! Even those watching England play football in the World Cup left their seats to watch this spectacle. Our under 9s and 11s played in the Capel 6-a-side competition which is always a great day out. During the summer we hosted the Surrey Under 10 match against Buckinghamshire and provided our ground for their training sessions. We also hosted and provided junior bowlers at a special training session whereby top Surrey coaches came to Newdigate to demonstrate bowling skills to coaches from other clubs from around the County. 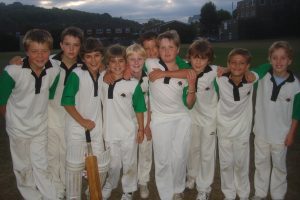 Under 11s after losing their cup-final 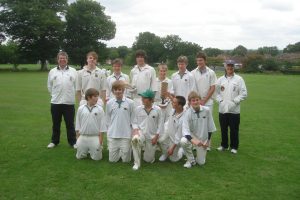 Under 15 team that played against their coaches 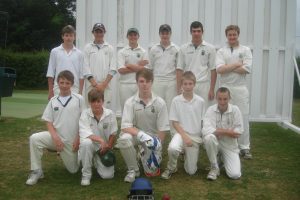 The under 17 team that played in the Dennis Jacobs Cup

We provided ‘introduction to cricket’ courses during the summer term to Newdigate Infants School, the Weald Junior School and St. John’s Community School and in May our ECB Clubmark Focus Club Accreditation was confirmed for another three years. This accreditation enables us to make grant applications and you may have seen our new pitch roller which was provided by a grant from Sport England and we will shortly be modifying our nets thanks to grants from the Gatwick Community Trust, the Surrey Cricket Trust and the Surrey High Sheriff’s Awards. Our thanks also go to our sponsors, Bob’s Shop, BC Plumbing and Healthy Balanced Generation Fitness Centres who provide our really smart shirts.

We are ever mindful of others and we were delighted to host a 20/20 match for the staff of Headley Court and on August Bank Holiday Sunday our ever popular Six-a-Side competition raised £1500 for Diabetes UK in memory of Peter Clark. 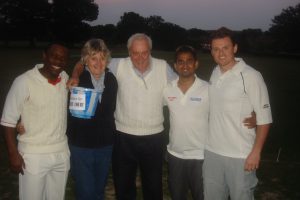 Despite poor weather the bonfire night was very successful as was the dinner and dance at the Russ Hill Hotel.

This winter we will be finalising our plans for a new pavilion and hope to have a fund raising launch in the spring. We were very honoured to receive the runners up reward in the Surrey Sportsclub of the Year category at a special ceremony held at Denbies in November. 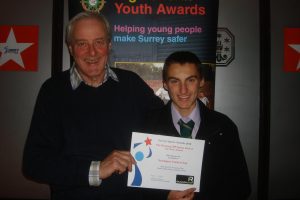 The cricket club is always a very sociable and welcoming place to spend an afternoon or evening and as illustrated there is always the chance of seeing some pretty exciting cricket. 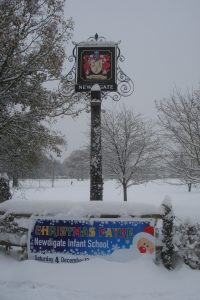 A snowy Brocus in December 2010