After an unseasonably cold April and May the weather settled and we had a fine summer coupled with lots of exciting cricket. There were high expectations with the Saturday 1st and 2nd XIs moving to the Fuller’s Brewery Surrey County League – was this a step too far? and how would the 3rd XI cope in the Surrey Downs League? Full reports follow. The highlight of the season was the visit of the famous Lashings World Cricket XI on the 2nd June. It was a joy to see the Brocus full of people and so many famous international players at the ground, and it was a day that the players will remember for the rest of their lives. Commentator, Henry Blofeld’s comment ‘Will Ben Crook steal a wicket?…. oh my goodness he has clean bowled Gordon Greenidge!! ‘ will go down in club folklore. Paul Bettesworth hammering Correy Collymore will not be far behind. A full report and pictures can be found elsewhere. 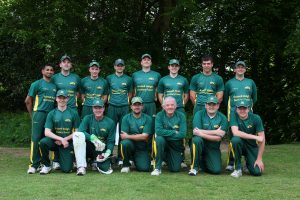 Another highlight was the visit of Richie Benaud who came to support the pavilion appeal and formally open the new artificial wicket. He was joined by Pat Pocock. 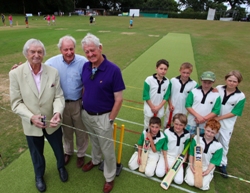 In September we had a surprise visit from a Russian film crew who spent a month in this country filming a documentary about England which will be broadcast throughout Russia in 2014. 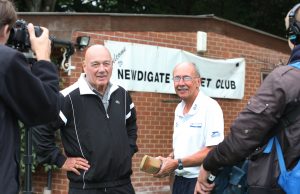 Junior cricket, for both boys and girls, was very successful with the u15s winning the East Surrey Colts League and reaching the semi-final of the Surrey Cup, losing a close game against Guildford at Woodbridge Road. A full review of the season can be found under the junior section.

We are very grateful to all our sponsors who have provided kit for the teams – B.C. Plumbing, The Horley Motor and Engineering Company, Search4Technology, Bob’s Shop,Dorking Deepdene Rotary Club and Ibstock Brick Ltd

Much time and effort has been put into the pavilion and scout hut appeal. The launch at Greens Farm last November was well attended and Martin Clabby designed and set up a dedicated website for the appeal. We have had many fund raising events, a quiz at the Plough at Leigh, our girl cricketers competed in a Swimarathon, the Lashings match, Village Day, the Bonfire Evening, a visit to the Surrey Hills Brewery, the Newdigate Friendship Group held a very successful coffee morning and the Beare Green and Newdigate Choral Society held two concerts in December and dedicated a part of the retiring collection to the appeal. The Newdigate Theatrical Society performed a pantomime in December and January which was sold out and raised £5000, the scouts have organised a Burns Night in January, another quiz will be held in February and our girl cricketers will take part in a Swimarathon and in March a group will be walking the Monopoly board. Behind the scenes we have become a registered charity and have formed a limited company. We will become VAT registered and are currently negotiating a 30 year lease with the Community Centre. Gift Aid certificates have been sent out on two occasions with the parish magazine which targets 800 households. We have received a number of generous donations as a result of this initiative. We have afunding application in with Surrey County Council (£50,000), but our applications to Mole Valley District Council (£20,000) and the Bernard Sunley Charitable Trust have been rejected. In December we submitted an application to Sport England for £50,000 and will later make an application to the waste management company, Veolia. The English Cricket Board will be making us a priority club for 2014 and have formally written to us stating that once we have raised 50%, assuming that we cover all the required criteria, that they will consider funding the other 50%.

Here are the captain’s reports.

2013 saw us enter the Fuller’s Brewery Surrey County League for the first time, and it was a season of varying success. The early fixture list was kind and we were second in the league going into the last week of June and named ‘Club of the Month’ for May. We went into the match against Hampton Hill full of confidence. An hour and a half later, having been skittled for 53, and seen our total knocked off easily, we weren’t quite sure what had hit us! We suffered another comprehensive defeat the following week against eventual runners up, Old Tenisonians, and our season never quite recovered.

It soon became apparent that Fuller’s league cricket was a bit tougher than the early games had indicated, and we slumped to a final position of seventh. The only highlight in a disappointing second half to the season was an astonishing game against John Fisher. Having reduced them to 92-9, they recovered to 163 all out. In reply, we slumped to an identical 92-9, before Ben Crook and Angus Campbell led us to a memorable victory!

At the start of the season, our target was a top half finish before the league split in half in 2014, and we achieved that comfortably. The league has now restructured so that we are in a league of ten, playing each other twice, once in a timed game, and once in limited overs. This will give us a new set of challenges, and given our record against the top half of last year’s table, we will certainly need to up our game!

Having captained Newdigate teams almost every season for the last twenty years, I have decided to take a break this year, and hope the new captain can push the team forward in what I expect to be a tough season.

The 2nd XI had a good first year in the Fuller’s League finishing fourth out of sixteen teams. But for a couple of cruel weather interventions we might well have finished second and gained promotion. We beat the second and third teams in the league – but that’s cricket.

The team spirit was again excellent throughout the season and we look forward to next year’s fresh challenge, with real hopes of promotion.

The notable bowling performances came from:

**Dev Patel’s extraordinary spell at Ewhurst of 8 overs, 7 maidens, 4 wickets for 8 runs ** George Warne’s hat-trick against Wandgas and 18 wickets in the season at an average of 18.40 ** Angus Campbell took the most wickets, 21, and bowled the most overs, 109.4 ** Will Bowley won the bowling award on the back of his match-winning spell at Old Tenisonians of 15.2 consecutive overs, 7 maidens, 7 wickets for 21 runs. His season’s average was just 13.82 runs per wicket.

And a special word for Andy Kehl who averaged 14.30 with the ball and 28.25 with the bat – an excellent all rounder’s performance.

Thanks to our umpires and to the Kehl family for the excellent teas.

On the whole the 3rds had quite a successful year; we won 4 games, lost 5, as well as 2 winning draws, 5 losing draws (some with the 4 bonus points) and 2 matches rained off. The highest score recorded by the team was 188-3 when we chased down Ockley’s 187 with 3 balls to spare. The highest individual innings was 87 by Finn Osborne and the best bowling figures belonged to James Bettesworth with 7-84.

Mentions should also go to Matt Dilger for his three 5 wicket-hauls and consequently, he was the leading wicket taker with 23 wickets at 12.35. Charlie Wyllie and Dev Patel also put in some excellent performances throughout the season, and Dev claimed perhaps the most memorable bowling performance of the year when he bowled 15 overs in a row away to Ockley, claiming figures of 15.10.7.5. James Penfold recorded 395 league runs at an average of 32.92 and Finn Osborne scored 250 runs at just over 31. We finished a solid 7th out of 10 teams; over 100 points ahead of the team in 8th. This was a very good performance considering we were the only 3rd eleven in the league, and several teams mentioned how impressed they were with how many talented juniors the club was producing. 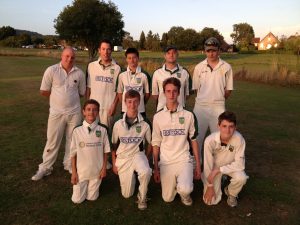 We had the fewest losses of any season so far by the 3rds and after a slightly variable start to the year (in which we had to wait until the 8th game of the season for our first win), we had a great second half to the year which included a 7 match un-beaten run. This included beating top of the table North Holmwood.

Overall it was a very successful year for the 3rds, with many juniors beginning to show their ability at adult level and more regular players putting in consistently useful performances. 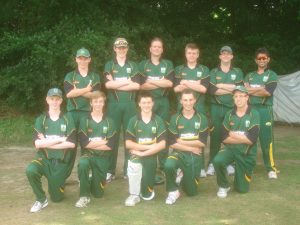