The 2015 season proved to be a most successful and happy season for everyone despite the fact that we were without a pavilion and had to operate from a garden shed and an awning!

Tom O’Malley was our first ever overseas player and the experience is one that delighted everyone. Not only was he a good player but he was an inspirational coach and a really nice person. 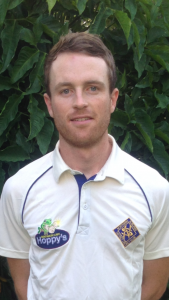 As reported last year at the end of the 2014 season the ECB published a report illustrating the decline in the number of players participating in recreational cricket. The number of players aged between 14 and 65 dropped from 908,000 in 2013 to 844,000 in 2014. We have witnessed this with the number of clubs struggling to field second and third eleven sides, the decline in Sunday cricket and the amalgamation of clubs. The ECB is also aware of the drop-outs after junior cricket has finished. As a club we are not immune from these problems and we again entered the NatWest 20/20 Blast for under 19s. Our fixture secretary, Mick Randle, has produced an interesting Sunday fixture list with the introduction of a number of traditional wandering sides who actually like to stay, have a drink and chat about the game. Graham Capel has reported that there has been an upsurge of interest in the mid-week team.

Now that the new pavilion is complete we hope that this will encourage players to socialise and perhaps entice new players to join.

The junior section continues to produce good players and is the lifeblood of the club. It was wonderful to see Finn Osborne and George Warne smash club records in an amazing 3rd XI match It is good to see more players, some of whom were juniors themselves, now involved in coaching and our summer camp was again very successful .

Captain’s reports are as follows:

In contrast to previous years, 2015 proved to be a season where batting, bowling and fielding came together. As a result we had an extremely successful year and finished champions of the 2nd division of the Fullers Surrey Count League by 36 points. With no games cancelled due to the weather, we played 18 matches – winning 15 and drawing 3. This resulted in us being the only unbeaten team in all of the Fullers and Surrey Championship pyramid. Looking back over the season, I think our resolve was tested to its highest at our very first game against Caterham. Without fully understanding what our expectations were for the year, at 5-3, I wasn’t particularly hopeful. Thankfully the cool heads of Dan Jones and Justin Renwick set a platform for a match winning total and restored my faith. I truly believe that performance set the tone for the winning mentality the whole team played with for the rest of the year. Our batting performance this year compared to last was quite a transformation. All five of our top order reached and comfortably surpassed last year’s highest run scorer. Tom O’Malley led the way with a total of 821. Ruky Wickremasinghe and Dan Jones were just shy of the 500 mark and both Justin Renwick and Richard Callcut finished in the mid 300s. These totals were ably supported by the rest and everyone throughout the year made a valuable contribution at some point. Four players reached triple figures – Dan in the first game against Caterham, Tom in the game against Wallington, a maiden 1st XI centuryagainst Wandgas by Cameron OSborne and Richard, in a quite extraordinary innings, in the season finale against Sheen Park. The bowling unit again had an excellent season. Everyone bowled with consistency and took wickets at important times. The wickets were shared around with six players getting into double figures. Allan Cooper topped the wicket charts with 38 victims. Benny Crook followed closely with 32 and Ruky, Paul Hughes and Andy Kehl all reached the high teens. In terms of individual performances, Allan Cooper claimed two five wicket hauls against Sheen Park and Chobham , whilst Ben Crook also took a brilliant five against Caterham. Backing up the bowlers, our fielding displays were also excellent, I have no doubt that our win column wouldn’t be as high without the enrgy and determination put in every time we walked on to the pitch. Allan Cooper topped the list with 11 catches, Tom O’Malley abd Paul Hughes both on 8. One game worth mentioning was our trip to Sheen Park, by far the best fielding performance I have been involved in. 5 catches each of which would have been a contender for catch of the season, my pick from that would be Tom O’Malley’s full length dive and short mid-wicket to take an amazing left-handed grab just off the floor.

Tom was Newdigate’s first venture into an overseas player and I’m sure everyone will agree that it has been a huge success for the club both on and off the pitch. When we set out looking for the right player profile, it was important that we learnt from experiences we have come across at rival clubs. We didn’t want someone coming here and being the super-star that bats and bowls all day and wins the league single handedly. Although Tom was a great talent we didn’t win the league on his ability alone. If he didn’t perform to his best there was always someone willing to raise his hand up and put in a match winning performance. We should all be very proud of our achievements this year, it has definitely been the most enjoyable season I have been involved with from both an on the pitch experience and a social one too.

Nest season is definitely one to look forward to, I’m under no illusion that it will be challenging. We move to the first division where the standard and quality of cricket will be higher. We are currently in a very good place as a club. As well as the first team did this year there are a number of younger players knocking on the door to become first team regulars. The like of Angy Kehl, who staked a regular spot in the team even pushing me out to take the new ball and Cameron Osborne who looked completely unfazed stepping up and smashing an unbeaten century in our title clinching game.

I’d like to finish by saying a few thank yous.

In difficult circumstances, Tricia and the Kehl clan deserve huge credit for their catering services. Also at times of need Diane and my Mum have also come up trumps and done a brilliant job. Also everyone involved in the upkeep of the ground and wicket – I know that without the roller and lawnmower John and Andy would feel incomplete … and finally on a personal note, a big thanks to John and Tina Callcut for their generosity on many occasions putting me up after one too many beers celebrating a good win. I think the players’ wives and girlfriends need a mention for allowing the amount of beers and nights out we had over the summer. 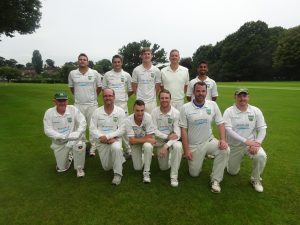 We finished fourth in our division having played sixteen and won eight, lost five and drawn three, but in truth the season could have been so much better if it were not for three away games. When we had eleven players we were strong and according to a couple of opposition captains we were the ‘strongest in the league’ which was difficult to disagree with considering we beat every other team except Sheen Park (who also didn’t beat us). Unfortunately the away games vs. Haslemere (eight players), Caterham (eight players) and SRKCC (nine players) hurt our season as all three games had moments when we believed we could win, even with our depleted numbers. The lack of consistency with selection was highlighted by the fact that 38 different players were selected with only Will Bowley playing in every game.

Focussing on the positive, batting performances of note were Mark Rance 102 no vs. Chaldon, Finn Osborne 110 vs. SRKCC, Cameron Osborne 104 vs. Weybridge Vandals. The batting award went to the man who scored seven scores of 50+ (nearly 8) and won the award with an average of 65.63 – Mark Rance.

In bowling news, Will Bowley dominated the wickets with 31 and he took home the league bowling award which was thoroughly deserved. He was joined in the wickets by Craig Jones (15), George Warne (13) and Sean Roast (11). The winner of the bowling award was none of these people! He started the season as our wicket keeper but started to show his ability by bowling tidy leg-breaks at Haslemere. He went on to take nine wickets at an average of 14.33 – Finn Osborne.

Other awards of the season were the Player’s Player of the Year going to Mark Rance and the Captain’s Trophy of the Year going to Cam Osborne. Both had great seasons with the bat and to see Cam promoted to the 1st XI and scoring a match winning century was testament to his hard work over the past few years.

We have a very good shot at getting promotion next year so long as we can get some consistency in selection. Failing consistency, please do not turn down the opportunity to play for the 2nd XI if the chance arises as turning up with eight players does no-one any favours! 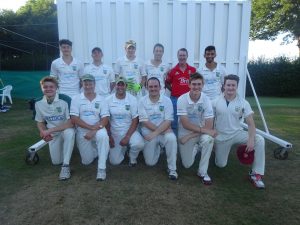 2015 was a tough year in many ways but we still managed to play twelve matches, winning nine of them and losing a very close match to a strong Buccaneers outfit. We also finished on the right side of two drawn matches to complete yet another successful season.

When most opposition teams were struggling to fulfil their side of the fixture, we managed to string up a decent playing eleven each week to play the game we all love. Even in trying conditions due to lack of changing facilities everyone did their bit to support the club and that justifies the success we had this season.

Tom O’Malley and Mark Rance led the batting front with 381 and 266 runs respectively. There were also very good supporting acts from Jack Bowley, Sean Roast and Justin Renwick. From a bowling point O’Malley and Rubin Flower took 13 wickets each. Flower also took home the bowling award for the first time in this his second season for the club. There was very good support from Ruky Wickremasinghe, Andy Kehl and from an evergreen Chris Moon too.

The likes of Jackie-Ann Goldsmid and Adam Moon keep improving every year and with a few more youngsters coming through the junior ranks the future hopefully looks a bright one for the club.

Thanks to Tricia Kehl, The Moon family, to Jinny Osborne and to Mrs Wickremasinghe for helping out in providing us with some of the best served teas!! (Al-fresco style). Also thanks to Andrew Major and John Callcut for their ongoing support in getting the ground and pitch ready for the matches. A special mention to Mick Randle for his continuous efforts in getting all the fixtures in place and for co-ordinating everything, even when things needed changing at the last minute due to opposition pulling out of the fixtures. Thanks Mick!