2017 was the most successful season in the club’s history. The 1st XI won the first division of the Fuller’s Brewery Surrey County League and lost in the final of the league cup. The 2nd XI came 5th but at times struggled to field a full eleven. The Sunday team played a series of very good friendlies but the mid-week team was blighted by bad weather that seemed to affect many Wednesday evenings.

Three batting records were broken in 2017: Charlie Major and Matt Clarke  posted the second highest partnership in the club’s history when they scored 246 against Long Ditton on the 8th July. This is also the best opening partnership ever recorded beating the previous record set by Dan Jones and Matt Ross in 2002.  Ian and Andrew Kehl broke the record tenth wicket partnership. Their 75 broke the previous record of 74 set by Peter Pople and Jack Bowley in 2006. What with Bill Turner and Jack Bowley breaking the highest seventh wicket partnership this has been a vintage year for batting.

The Summer of 2017 proved to be extremely successful on the pitch although shadowed with an immense amount of sadness off it.

The Saturday 1st XI recorded their 2nd league title win in three years along with a reaching the final of the League Cup. After an indifferent 2016 expectations were unknown but playing some outstanding cricket against some strong opposition, we secured the title by 10 points on the final game. This league win was not as comfortable as the last and in fact on many occasions we had to rely on results elsewhere to keep our noses in front.  Seasons final match statistics were –  Played 18 – 11 wins,  4 losses and we had 3 matches abandoned.

22 players were used during the campaign. A couple of new faces and some returning players all settled well and contributed significantly to results and moral. Team spirit was high throughout and many a night spent in Reigate celebrating big wins. Overseas player Cody Irvine was instrumental in bringing a team together with excellent performances on and off the pitch. I’ve no doubt the bar takings at Mishiko’s have dropped considerably since his departure, not to mention Bobs Shop!!

It was Cody that topped the run scoring and averages with 491 runs at 40.92 scoring three 50’s. I’m in no doubt that he would have liked to convert the good starts into bigger totals but his big hitting always carried a risk. Closely behind, Tom Collard’s average of 39.14 just missed out on the award. Other notable contributors,  Richard Callcut scoring over 350 runs with two half centuries and Stevie Kehl and Justin Renwick posting competitive averages. The highest individual score was Richard Callcut with a not out 87 vs Roehampton.  There is always room for improvement and I’m confident next season will see a number of other very capable batsmen improving on this year’s totals.

Bowling yet again proved to be the strongest discipline. 5 bowlers sat with averages under 17, making run scoring very difficult for opposition. The lowest of those averages and claiming the bowling award was Paul Hughes with 19 wickets at 11.89. This was followed by Allan Cooper who took 40 wickets at an average of 12.50. Stalwarts Ben Crook and Ruky Wickremasinghe again performed admirably with 26 and 25 wickets respectively. 3 players took 5 wickets hauls, Allan and Cody both against Effingham CC 5/13 and 5/17,  but with possibly the best performance of note was Paul Hughes blowing away the Thames Ditton tail and recording figures of 5/6. There is no doubt that the bowling attack is not getting any younger, the good news is that we have younger talent coming through and I see the next couple of years being a time where these players take more responsibility and reduce the workload of us older ones.

In the field we were much improved, some of the catching was quite frankly inconceivable at times, Mike Deloford seeming to take a screaming catch week after week. Cody takes most plaudits with no less than 14 catches and 2 run outs. Deloford and Cooper in runner up spot with 8 catches apiece.  A shout out should also go to David Arnold who in 9 games took 26 victims behind the stumps.

Whilst on the field successes will be savoured in the archives, it was not all serene off it. With huge sadness Newdigate lost one of their chief supporters and friends, Norma Cooper, to a short battle with Cancer. I’m certain that she would have been watching proudly, cheering us on to victory.

Other lowlights include the tragic and sudden death of Effingham’s Mark Collin in our home league fixture. Whilst a number of people played their part, Newdigate’s Charlie Major and Cody Irvine were heroic in their courageous attempts to save his life, unfortunately it was in vain, but those efforts have not gone unrecognised, as the league and Effingham CC awarded Newdigate CC with the Mark Collin award for sportsmanship.

Next season we find ourselves competing in the Premier division of the Fuller League, I feel we are in very good shape, not only hold our own but to compete towards the top end at the table. There are a number of teams that we know well and some old rivalries rekindled.  More team running races, naked balcony cricket and drinking games will be welcomed and maybe this year we can go one step further in the Cup!

A large thanks go to Christine and helpers for the catering, Andy, John and Roger for the upkeep of the square and outfield and the whole Bailey clan for running the bar. My final thanks go to The Major’s, Callcut’s, Bailey’s and the Wickremasinghe’s for homing Cody for the season. 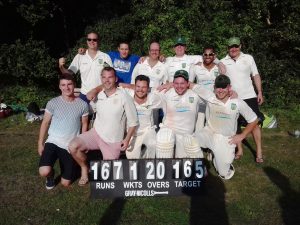 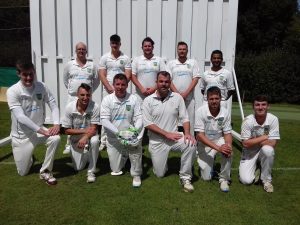 It was a bit of a disappointing season for the seconds. We finished 5th in a league that if we had our strongest team more regularly we would win.

In the end we played 14, drew 2 and lost 6. The highlight of the season was when Charlie Major and ‘Cheesy’ Clarke put on 246 for the first wicket chasing down 247 against Long Ditton. We had a lot of other highlights with the bat, Charlie scored two tons, Cheesy one and Dave Wrightson got one. Dave won the batting award with an average of 85.67. Charlie averaged over 100 but only batted four times. With the ball, Sean Roast won the bowling award. He took 16 wickets, Will Bowley took 17 wickets and Matt Clarke took the only 5 fer with 5-34.

I’d like to thank Roger and Ros for doing the bar, Christine for doing the teas and Cops and Charlie for getting teams together nearly every week. 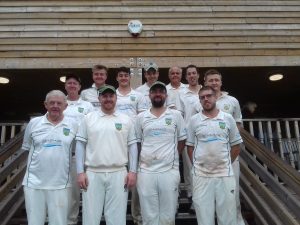 The team played nine matches and won five, lost three and drew one. Cody Irvine hit two massive scores of 155 and 149 and hit 48 sixes. Plenty of entertainment on Sundays. Thanks to Stevie Kehl and Cody for standing in as captain when I wasn’t available. 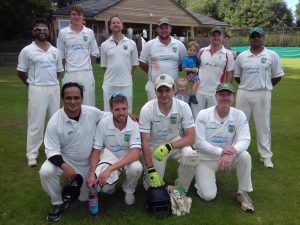 I am pleased to report that all our players survived the past season although one or two were a little infirm by the end of the season!

We were scheduled to play 18 games but only 13 were played due to weather. It was at the height of the English summer, the end of July and August that was the problem with five games in a row rained off. We think that God must have had something against the midweek team as on every other day of the week for these dates the weather was playable! It was only on Wednesday that the rain came?

Of our 13 games played we won 5 and lost 7 with one tied on equal score at the end of twenty overs. This happens very rarely. In our 30 years of playing midweek cricket at Newdigate this has only happened five times previously and this time it was with a team with whom we had tied before – amazing!

Mike Ashkuri was our highest scoring batsman with 185 and he has won the batting shield three times in succession now so we will have to handicap him next season! Runner-up was Lee Brien with 138 and he has won this twice before in 2014 and 2015 but not 2016. ‘Tin Man’ Barry Wiles won the bowling with 12 wickets. The last time he won this was in 20115 and previously in 1998. I was runner-up with 7. This is the third time I have been runner-up. The first was in 1996! Lee Brien won our catching award and Jon Pritchard was awarded our Special Cup for three great stumpings. Roger Bailey was awarded our Player of the Year for a good season both in front of and behind the stumps and also behind the bar, plus making our Wednesday evening at our new pavilion much enjoyed by all of our players.

Our pre-season meetings for the approaching season for Funds Extraction, pr payment to join either full season or part season, team character assassinations related to performance both on and off the pitch, medical condition reports of our ageing players, rule changes in our favour and any other irrelevant business will be on the first Wednesday of February (7th), March (7th) and April (4th). Luckily there will be less controversial rule changes proposed as Mike Young is exiled to Australia.