Sunday 1st XI starts VCL in style with a win

Sunday 8th May 2022 was the opening day of a new era for Newdigate CC Sunday 1st XI, as we started our first Village Cricket League match against Effingham with a strong win on a low scoring affair.
Both the teams played a few colts, the weather was sunny, it was a timed match, there were some moisture on the pitch. Newdigate won the toss and decided to bat with the idea to see off the opening spells, let the moisture dry and set up a score around 180 and then defend it.
Well, the batting plan did not quite materialise, Effingham made inroads with Newdigate’s top and middle order. Newdigate was reduced to 23/6 on the 13th over. The tail wagged, Mike Duthie (42) leading with Charlie Stimpson (24), James Dearley, Jon Bell and Balaji Raju all contributing to achieve a score of 128 before the visitor’s innings folded in the 34th over. Ollie Tebbits (9-14-5) was the pick of the bowlers for the hosts.
For a win, the hosts needed just 129 from 51 overs – easy? Especially when the pitch eased up and the ball was coming on the bat nicely. Defending a low score of 128 was challenging, but confidence were there as Newdigate had a strong bowling attack. A nice tea was enjoyed, thanks to Effingham for hosting; there were talks of a past encounter of the exact situation back in 2019 https://newdigatecc.play-cricket.com/website/results/3755552
Jon Bell and Jagadeesh Subbiah started strong; with Jon bowling with his accurate line, creating the pressure while Jagadeesh profiting with the wickets. The hosts had a slow start and scored 17 runs in 13 overs losing 4 wickets. Ollie Tebbits (24) and Dave Roberts (39) steadied the ship and kept the scoreboard going. It was a cat and mouse game with Effingham was gaining the advantage every time a boundary was scored, but Newdigate claiming it back by taking a wicket. Regular rotation of bowler, 8 were used and the variation helped getting wickets. Last two wickets, two talented Effingham colts, stuck together to frustrate Newdigate, four dropped catches did not help either, possibility of all results – loss, win, draw – were in the cards. In the end, Duthie made the day his own by taking the last two wickets to seal a win for Newdigate. Effingham innings folded scoring 117 in the 46th over.
Phew, what a sea-saw day of cricket, the crowd had their money worth (not that they had to pay for a ticket, but they should do when watching Newdigate Sunday team are playing!). All players contributed massively, Duthie starred the day, Subbiah claimed four wickets, all the bowlers bowled economic spells, De Vrij kept outstandingly well, magnificent catches were taken by Seb Dearsly and Andy Glen. A great thank you all players for securing a wonderful win and we look forward to continue the run.

The under 14s secured a good win away against CC&W on a bitterly cold evening. Newdigate batted first and got off to a flyer with Dexter Duthie (30*) and Elliot Spiers (16) putting on 70 before Spiers was bowled by the consistent Jared Bristow. Harry Ball, Charlie Stimpson and Toby Wells all continued the good work enabling Newdigate to retire on 137-4.

In reply Duthie bowled the opener Joshua Heather but Matthew Puttock (31*) and Dillon Bristow (30*) put together a partnership of 88 before both had to retire. They were generally behind the run rate but when five 4s were scored in six balls hearts began to flutter. Skipper, Stimpson brought on his four senior bowlers to bowl the last overs with CC&W requiring 28 to win. They did the job and Spiers excelled taking a wicket and conceding just one run in the final over. CC&W finished on 130-4.

This was a particularly pleasing result as five u12s played in the match. They all performed well and demonstrated their commitment to the club. The skipper wanted to bring them all into the game but when things got tight he understandingly made the decision to go for the win. It was good to welcome Jimmy Penfold back to the squad. 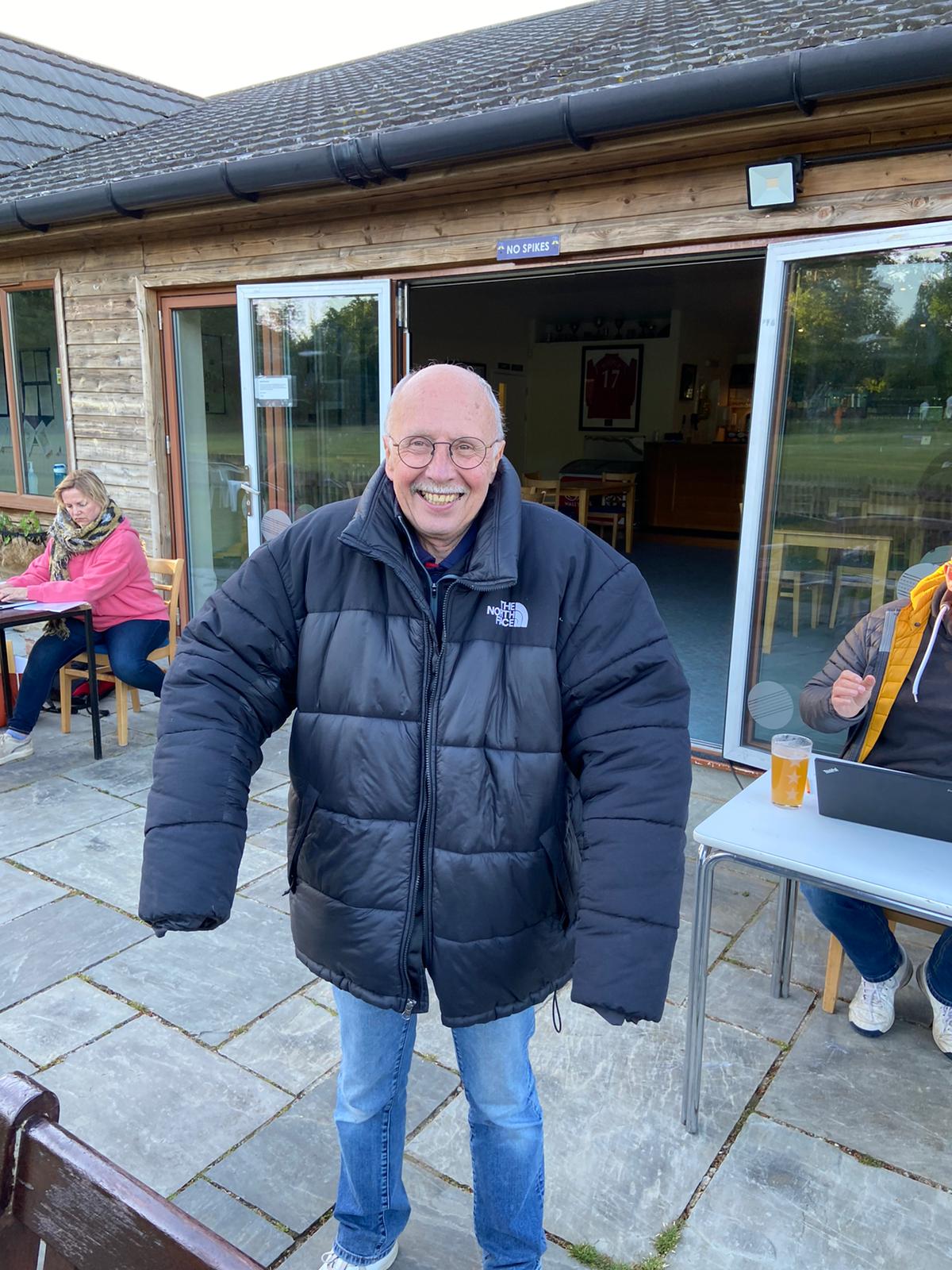 On a glorious sunny day, Oxted’s skipper Ollie Smith won the toss and decided to bat. This proved to be an inspired decision as their first two batters, Smith and Webzell retired and they only lost their first wicket on 108. Under 12, Joseph Thorneloe, claimed that wicket and another  to end up with an impressive 2-17. After their twenty overs Oxted finished on a formidable score of 176. Newdigate’s fielding was generally good but they tended to bowl too short and conceding 33 wides definitely didn’t help!

In reply Newdigate got off to a flyer with Rufus James and Elliot Spiers putting on an opening partnership of 50 in six overs. James retired on 35 having hit his first ever six!. Sebastian Dearsley (17)  and Dexter Duthie (21) kept the run rate going and after ten overs they were on 91-3. The pressure was on to maintain ten an over and inevitably wickets fell and Newdigate’s innings faltered as they were all out for 126 in the 16th over.

At Reigate’s St Marys pitch, Captain Toby Wells lost the toss and Reigate elected to bat. This turned out to be favourable for Newdigate given the fading light.

Harrison Smith and Jacob Mumford batted 3rd and managed to keep a clean sheet. Austin Hunter made a great debut for the U12 team paired with Harry Grimley. Harry managed to find the boundary 4 times and was the top run scorer with 21 runs. Jojo Thorneloe and Harry Woods closed the batting for Newdigate finishing on 286 runs.

Reigate ended up needing to find 14 runs off the final over. Archie bowled well, but a fielding error meant they took 7 runs from the penultimate ball leaving them needing 3 from the final ball of the over. Despite the pressure Archie stayed strong and bowled a beautiful ball which Reigate couldn’t get hold of, securing a very deserving U12 team the second win of the season.

Ninjas on form in their opening Surrey Slam game

By Karen Fordree
The first game of the season for Newdigate Ladies 1st XI as they look to defend the title of the Slam league.

Facing a young Ashtead side, skipper Karen Fordree lost the toss, (some things don’t change!), and Ashtead elected to bat.

Anna Lewis opened the bowling on strong form, followed by Charlie Collard but the opening batsmen proved hard to break down. We showed a pretty strong performance in the field but the outfield and pitch were lightening quick and Ashtead kept finding the boundary.

Harriet Fryer made her debut for Newdigate bowling 4 overs with an economy of 6.75. Sharon Millar also played her first match for us putting in a strong performance on the boundary.

In the 9th over, a great catch by Rachel Lyndon got Karen Fordree the first wicket of the season, and Anna Lewis and Charlie Collard followed with 2 and 1 more respectively. Ashtead finished the inning of 16 overs on 113.

Charlie Collard on great form, making a total of 32 runs which included three 6s, the last of which put an end to the game in the 12th over.

Newdigate’s preseason finished well with a strong victory over London Gymkhana, who were promoted last year from our division up into the Surrey Championship. Having not beaten the side from Alexandra Park in Surbiton for a number of seasons now, this was a good opportunity to prove that the credentials are in place for a similar move up the leagues. On another glorious spring day, Newdigate started well having been put in the field, with Cooper striking early with Ahmad going for a duck. The other opener Tahir Iqbal, ever a thorn in the Newdigate side, went on to score his standard 50, but apart from Chaudhary (62) the visiting side were kept very much in check and with the wickets being shared between Cooper (2), Davies (1), Wickremasinghe (2), Dunkerley (1), Down (2) and Roast (2), Gymkhana being bowled out for 201 in 39 overs.

In a novel and promising turn of events, Newdigate’s chase started well, with both openers scoring at a good rate, Wickremasinghe (47) and Arnold (39) laying the foundations for others to build on. The win was sealed by Davies (67*) and Dunkerley (31*), who looked in excellent form, offering up both classical and explosive cricket shots that had the crowd purring. Newdigate reaching 205 in just 32 overs to win by 6 wickets. Next week the 1st XI travel to Dulwich for their first league game against recently relegated Alleyn CC, whilst the 2nd XI are at home to Warlingham. Please come down and show your support.

By Monjur Elahi
Sunday XI
A full strength Crawley CC met Newdigate CC Sunday 1st XI on 24th March 2022 at Newdigate Cricket Club. The weather was dry, somewhat windy with sun peeping through occasional clouds. Crawley CC won the Toss and decided to bat first.
The visitors’ innings started quiet which sustained three early blows as the Newdigate bowlers saw early success. Their innings picked up the pace with Prav Sing (69), Amir Zafer (23) and Sardar Sohail Khan (51*) scoring effortlessly. Wickets in intervals restricted the visitors from scoring a big total and the first innings ended with a total of 201/7 in 40 overs. 8 bowlers were used by Newdigate, Mike Duthie and Andy Glen took 2 wickets each, while the other bowlers chipped in with either wickets or economical spells.
Crawley CC bowled with exceptional discipline and Newdigate’s innings, in response, did not quite get going. The only resistance came in form of Andy Glen (26) and Mike Duthie (25) in the middle order. A late cameo came from Mark De Vrij (19*) taking the Host’s innings total to three figures. Newdigate’s innings folded scoring 110 runs in 25.4 overs conceding Crawley CC a win by 91 runs. Sarder Sohail Khan took 4 wickets while N. Khan claimed 3.
All-rounders Andy Glen and Mike Duthie made strong statements of forms at the season opener, the Dearsleys’ performances promised good signs.

All Stars Cricket for the under 7s. Sign up here:

The May Draw has been made and the lucky winners are:

Want a chance to win a cash prize and raise money for the club? Then join the Centurion Club. Contact Bill Turner on 01737 240329 or bill.jan@sky.com

Our DBS Verifier is Pierre Tartari. If you need a DBS or need to renew, then simply contact Pierre on 01306 887235 or the tarts@ntlworld.com. He will just need your full name, date of birth and e-mail address and he will set the process in motion.

We originally gained our accreditation in 2007. Following a detailed inspection on the 17th May 2010 the club again passed with flying colours. Three years later our paperwork was approved by the ECB in February 2013 and we had an inspection on the 8th July 2013 which we again passed. The system has now gone on-line and there has been a lengthy consultation period and as a result we were not inspected in 2016. Our documentation for re-accreditation was submitted to the ECB and gained approval. The club was inspected on the 19th May 2017 and our Clubmark status was approved for the next three years. It has recently been announced that the Clubmark system will be overhauled and as a result we will not be examined in 2020 but will just have to do a self assessed health check.