The under 11s with their coach Don Jones

Under 13s – This is a talented side playing in a very strong league and after the first half Newdigate was joint first. They had a brilliant cup run beating a very strong Southern Rail and Kenley team in the semi final and then winning a thrilling final against Lingfield. They went forward to the Surrey semi finals and lost to Wimbledon in a game they dominated for long periods. In the second half of the league they lost several very close matches to end fourth out of five sides, however they were level on points with the second and third teams. Congratulations to Jack Wyllie for representing Surrey at County level and to Thomas Ball, Harry Ramsey and Jamie Willis who represented the District. Coaches: Dev Patel, John & Richard Callcut 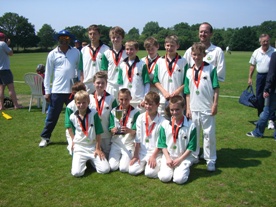 The victorious under 13 side with their cup medals

Under 16s – It was disappointing for the under 16 side that there were so few matches due to teams withdrawing and they ended third out of four teams. it has been gratifying to see a number of players stepping up into senior cricket. Matt Jee scored a century against Whyteleafe, Jose de Castro’s bowling has been improving rapidly and Matt Clarke has stepped up into the Saturday first eleven side on the back of a number of solid Sunday performances. Coaches: Geoff Cox, Ruky Wickremasinghe and Paul Bettesworth. 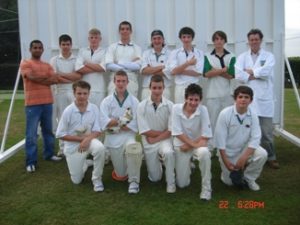 Under 16s with their coaches Ruky Wickremasinghe and Geoff Cox

Under 10s – We joined forces with Capel Cricket Club and entered a team at this level to provide more cricket. They finished a very creditable second out of nine teams.

Once again we held our presentation evening in May and we invited a number of village organisations along to make it a community event. Congratulations to all the winners and particularly Andrew Kehl, Charlie Wyllie, Thomas Ball, Daniel Goddard, Fraser Mosley, Will Bennett, Stephen Kehl and Jordan Morris who were selected to attend the Russell Haigh Bursary at the Surrey Cricket Centre.

At the end of August a group of under 12 players were invited to show off their skills during the interval of the England and South Africa One Day International at the Oval. This was a happy day enjoyed by everyone. 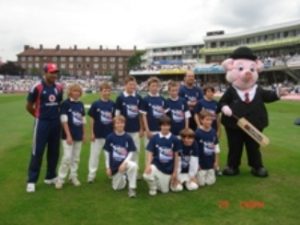 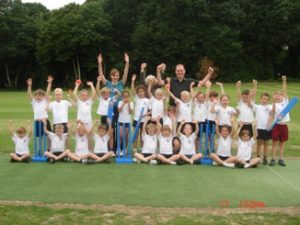 Newdigate Infant School on the Brocus

To round off the season a group of about forty juniors, parents and friends attended the Surrey vs Leicestershire Nat West Pro 40 match at the Oval on the 13th September. It was a happy day enjoyed by all. 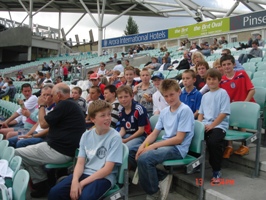 We will be losing Veronica Annis and Geoff Cox as they have decided to stop coaching and also Don Jones who will have heavy business commitments in 2009, but we would like to say a big thank you to them all for their dedication and commitment. Annette Jordan has agreed to become the Club Welfare Officer and her husband, Barry, is keen to help with the coaching. Also both Matt Dilger and Peter Trower have agreed to assist with the coaching.