This has been a difficult year especially with the lack of availability from the u13 age group and upwards. Overall our league results were also disappointing. We have lost a number of coaches from last year but were boosted by Simon Wells and Andrew Mayne who both passed their UKCC2 examinations. Congratulations to them both.

I contacted over twenty young players to see if they wanted me to enter the under 19 NatWest T20 Blast competition again, but I only received five replies so on that basis we did not enter.

Moving the junior training evening from Monday to Friday evening has been a great success with many parents and friends enjoying a drink without having to worry about getting to school/work the next day.

This year saw the introduction of ‘All Stars’ cricket. This initiative headed by Andrew Strauss and the ECB was designed to encourage young people to play cricket. We did a presentation at Newdigate School and a total of 36 under 8s registered. 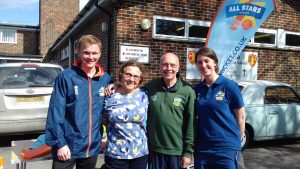 We are indebted to the Haigh family for providing funds for the Russell Haigh Bursary. This prestigious award is given each year to eight specially selected young Newdigate players who attend coaching sessions at the Surrey Cricket Centre at Burpham.

Many thanks to all our coaches present and pat as this was the 25th summer of junior coaching at the club. Let’s hope that things pick up again and we can look forward to a further 25 years of providing cricket to the youngsters of Newdigate.

Once again we presented courses to Y1 and Y2 at Newdigate Infants School which introduced all the boys and girls to the basic skills of cricket. We also did introductory courses to a number of girls at primary schools in Dorking.

We at Newdigate CC took up the All Star Cricket programme for our 5 – 7 year olds this season, and had a tremendous response with 36 youngsters joining up.

With their personalised shirts and kit, our juniors enjoyed fun games and cricket related skills helping them to start on the path to play. I know many of them practiced at home and kept parents busy in the garden as well!

Like many other clubs supporting All Stars, ‘Diamond Cricket’ was a firm favourite for all.

Many will now be well placed to continue into the older age groups next year and begin to see how it all fits together; developing cricket and teamwork skills. This will also lead them into match playing age groups.

My thanks to Annette Jordan who helped each week, together with the parents who  got involved with enthusiasm and encouragement. It also made Friday evenings a great social gathering.

Looking forward to seeing many at Minis next season. 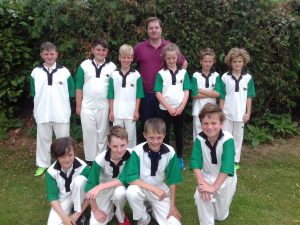 The Newdigate U10 squad was a small but close-knit group of players that actually ranged from U8 to some stars from the girls U12 squad. After some enthusiastic training sessions to blow away the cobwebs, the season started against Dorking.  Despite putting in a good bowling performance and collecting 5 wickets, they were never quite able to match the required run rate and came away a few runs short.  They took this knowledge into the next game but again were never quite aggressive enough when battling and ended up losing by a narrow margin.  Despite these early loses the squad worked really hard during training sessions and developed some excellent skills that they were then able to take into future matches.  The team from Reigate Priory came to the Brocus as league leaders, thinking they would walk away with an easy victory.  Through some fantastic fielding (two direct hits, two other run outs and a diving one handed catch) as well as tight bowling, the Reigate team realised they had met their match.  The run chase was fairly easy and a comfortable win ensued.

The remainder of the season was a mixture of amazing performances and silly mistakes leading to some wins and some loses.  Despite having to cancel three matches due to lack of players, we managed to play, and on occasion win with 8 or 9 people, the majority of matches giving lots of people a chance to play.  In spite of the numbers hiccup, the important thing was that all the players showed a fantastic improvement throughout the season and developed not only in their own skill level but also their team play and understanding of the game.

Well done and thank you to all those who turned out for the U10s this year. 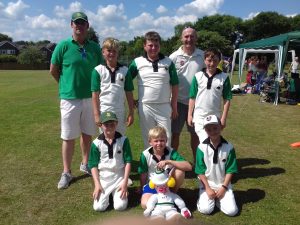 The U11s had a fantastic season with several new players adding to our strong squad.  We finished 4th in the League, winning 7 of the 10 games we played. Unfortunately we had 3 games cancelled that adversely affected our league position. We lost in the semi final of the Cup to the eventual winners. There were some great individual and team performances throughout the season, all contributing to the overall success of the squad…… Caroline Clark 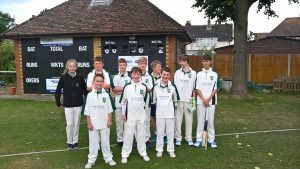 The NCC u13’s played a number of friendly fixtures this year.  This allowed us to field some u14 players as well as give a chance for our stronger u11’s to get valuable experience at a higher level.  The games were all competitive and close run and we were able to give over twenty NCC players a game.   There were some notable performances from the players, Thomas Clark consistently performed with the ball and Tim Holt stood out for his 3 wickets for 8 off 2.4 overs in one game but our strength was our batting.  Over the season Scott Bloomfield, Billy Hart, Oliver Wells, Fiona Kehl and Thomas & Samuel Clark all managed 30 not outs which resulted in 4 wins out of 5 games played.    Well done to all the players and thank you to the parents that make it happen. 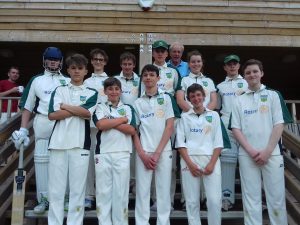 As we conceded three matches the team was dismissed from the league.

We had a very good group who represented Mole Valley in the Surrey Youth Games. We didn’t qualify, somewhat unluckily on count-back, but we had a very enjoyable day. The girls played in the Cranleigh soft ball competition and beat Cranleigh but lost to a strong Bramley side.

We entered the under 14 ‘Smash-It’ competition but owing to lack of availabilities we only played one round and had to withdraw from the other two. We played one friendly which we won but had to cancel a couple of other friendlies. This was disappointing and an embarrassment to the club. 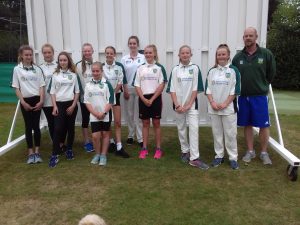 This was a very happy day. We provided a girls team, a ladies team and helped to complete a team that came from Pyrford CC. Surrey CCC and the ECB sponsored the kit, a free barbecue and copious quantities of Prosecco. Our girls played really well and won the competition with Imogen Collier hitting a six and a four to win the deciding match by one run.

As a reward of being joint first in the entire country for achieving our Clubmark renewal under a brand new on-line system our juniors were invited to be guard of honour at the Oval.

Thanks To Roger Bailey, Andrew Major, Cody Irvine and John Callcut who attended the Summer Camp everyday. Although numbers were down on previous years the young boys and girls enjoyed a fun-filled week of games and activities.

This is my final year as Junior Co-Ordinator and my administrative role will be taken over by Andrew Mayne. For better or worse I will still be coaching.