Work is underway on the square getting it ready for the 2022 season.

The coaches versus junior match was cancelled due to rain but the junior presentation took place on Sunday, 19th September. Numbers were disappointing but those who attended had an excellent evening. See junior section for a complete list of award winners and photographs.

The club’s dinner and dance was held at Stanhill Court on Saturday, 11th September. It was well attended and was a happy and fun occasion. Congratulations and thanks go to Corinna Osborne-Patterson for all the arrangements. Our President presented James Penfold with the Club Person of the Year Award and he in turn entertained us with some jokes and a service station or cheese quiz? First team captain, Lewis Davies, ladies captain Karen Fordree and midweek supremo Graham Capel summarised their seasons. Richard Callcut was unfortunately sick and Monjur Elahi was unable to attend. Here are some pictures.

The ladies were well beaten by a very strong Richmond side in the semi-finals of the Surrey Slam competition played at Horsley and Send on the 5th September. They did brilliantly to get thus far.

The 28th August was an important day for the club. The Saturday 1st XI beat Chaldon MO to secure their position in the Premier Division and the 2nd XI beat Whiteley Village to gain promotion.

The Sunday XI played an exciting match against the Cricket Society on the 14th August. Our old friend Ruky Wickremasinghe showed that he hasn’t lost it by scoring 95 out of his side’s total of 220. Newdigate’s reply of 207 fell just thirteen runs short.

On the 5th August we took a group of juniors to the Oval to have a guided tour of the ground and to see Surrey play Somerset in a one day match.

Unfortunately the match was abandoned in the afternoon due to rain.

….. so the boys set up an impromtu match on the Laker balcony.

The ladies victory at Outwood secured them the championship of the SE Surrey Slam League. Congratulations. 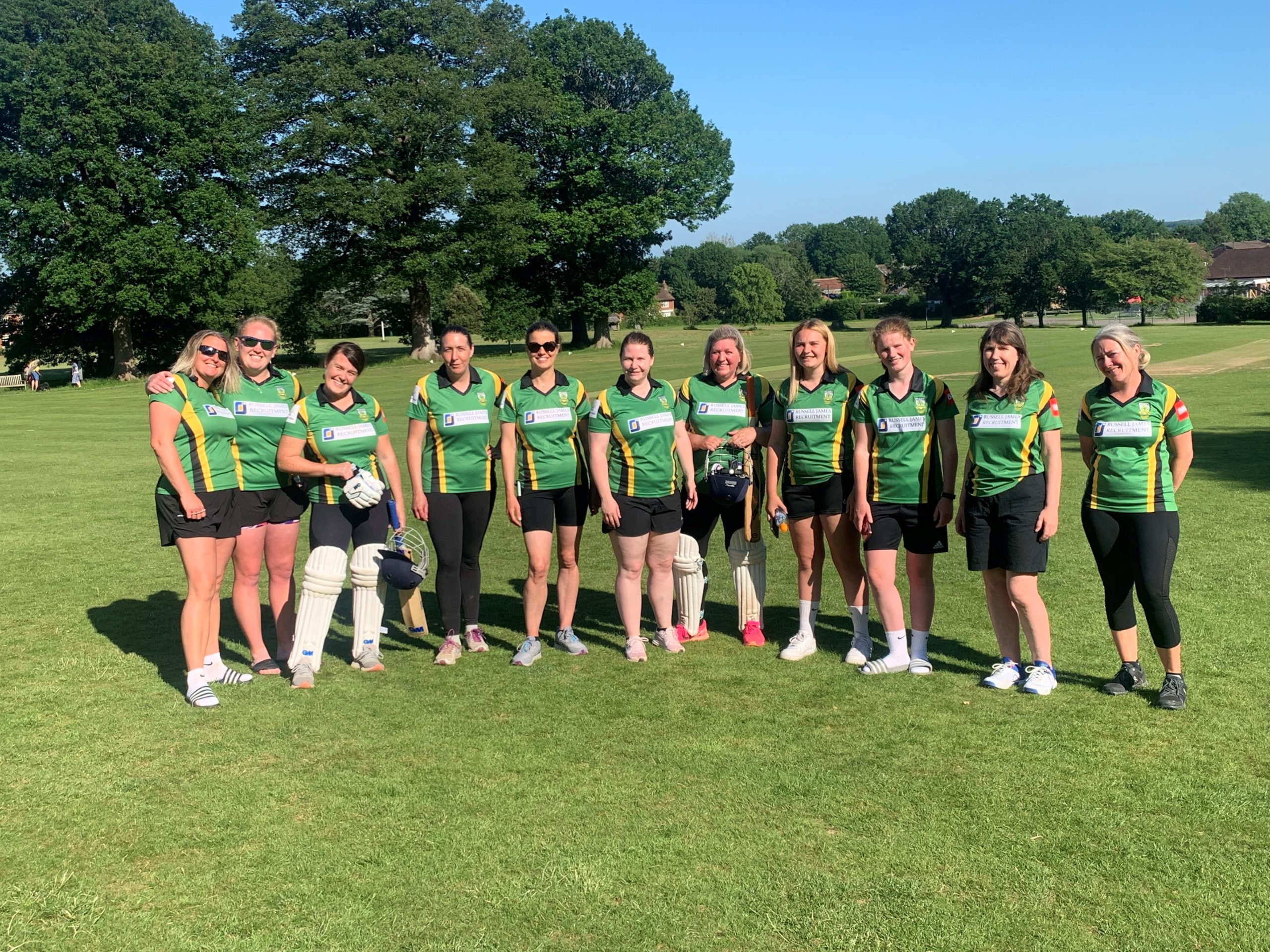 Despite the mixed weather a very successful Summer Camp was held during the week commencing the 26th July. Here are some of the children having a good time.

Well done Richard Callcut who gets his name on the honours board following his century against Caterham 2nd XI on the 10th July. 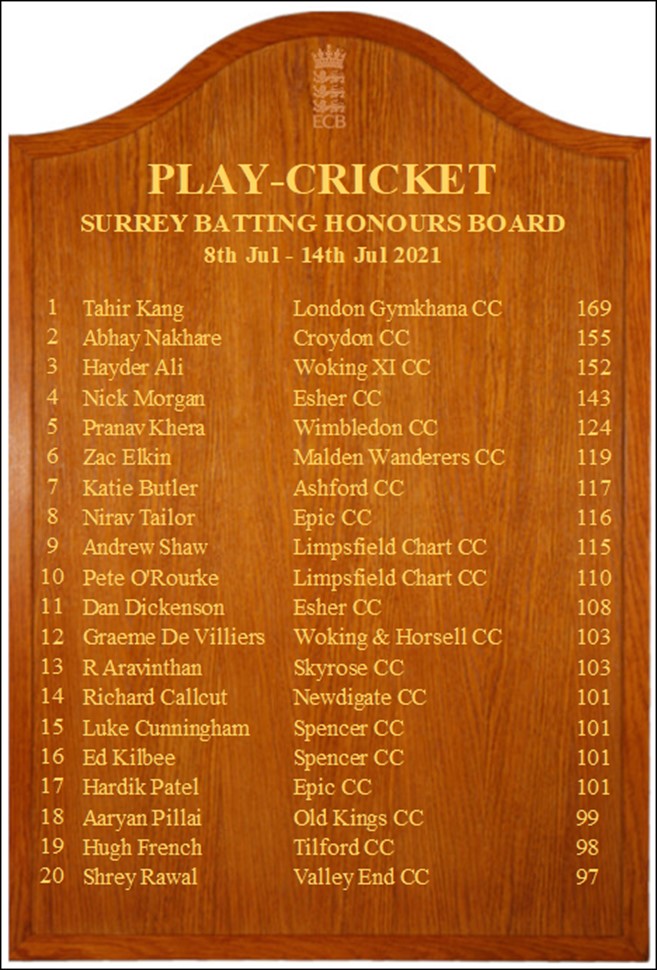 The under 11s match against Merstham on the 28th June was abandoned due to a terrific thunder storm.

What is going on? – Charlie Wyllie took a magnificent 8-51 as Newdigate seconds power to a win against Whiteley Village on the 26th June. The third best ever bowling figures by a Newdigate player. Lewis Davies hit 138 against Chaldon MO. Just outside the top 20 highest scores in the club’s history. 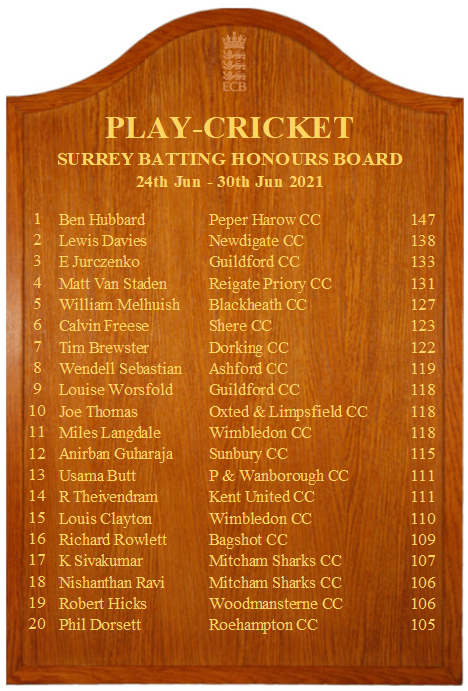 A nice picture taken during the 1st XI match against Chaldon MO on the 26th June.

The previously cancelled Russell Haigh Bursary has been continued throughout the month of June. Here are some of the recipients at the Surrey Cricket Centre at Burpham.

Brilliant Scott Dunkerley – 8-73 against Horley. Only the fourth player in Newdigate’s history to take eight wickets in a match…. and Horley filmed the match. 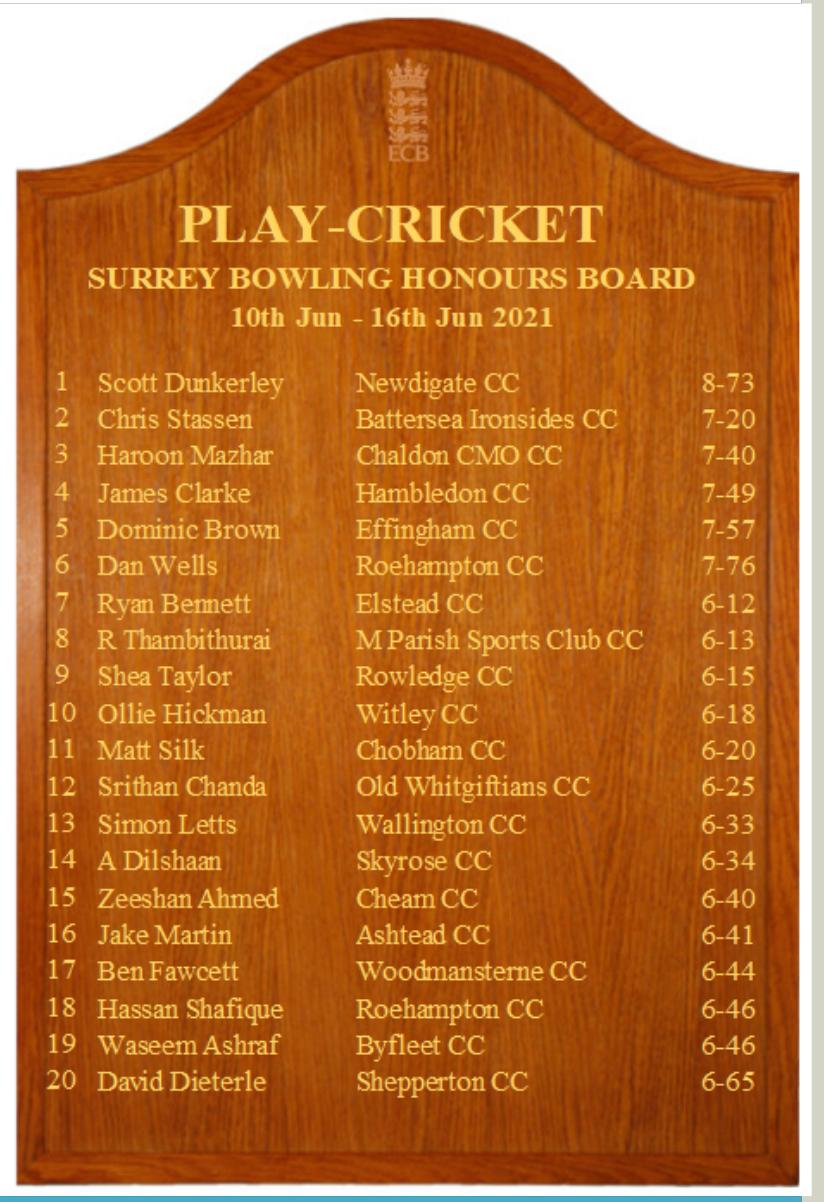 On the 27th May we concluded the 12th Chance to Shine session for Newdigate School.  About forty years 1 and 2 children have received tuition and have been encouraged to play and enjoy cricket.

22nd May – The new covers saved the home match against Lingfield which the firsts won convincingly. The seconds had a nail biting finish at West End Esher. With six to win and nine wickets down Jacob Moon hit a towering six!

15th May – What a day! The 1st XI won with three balls left and the 2nd XI won off the last ball. Charlie Wyllie demonstrates his commitment to his team.. 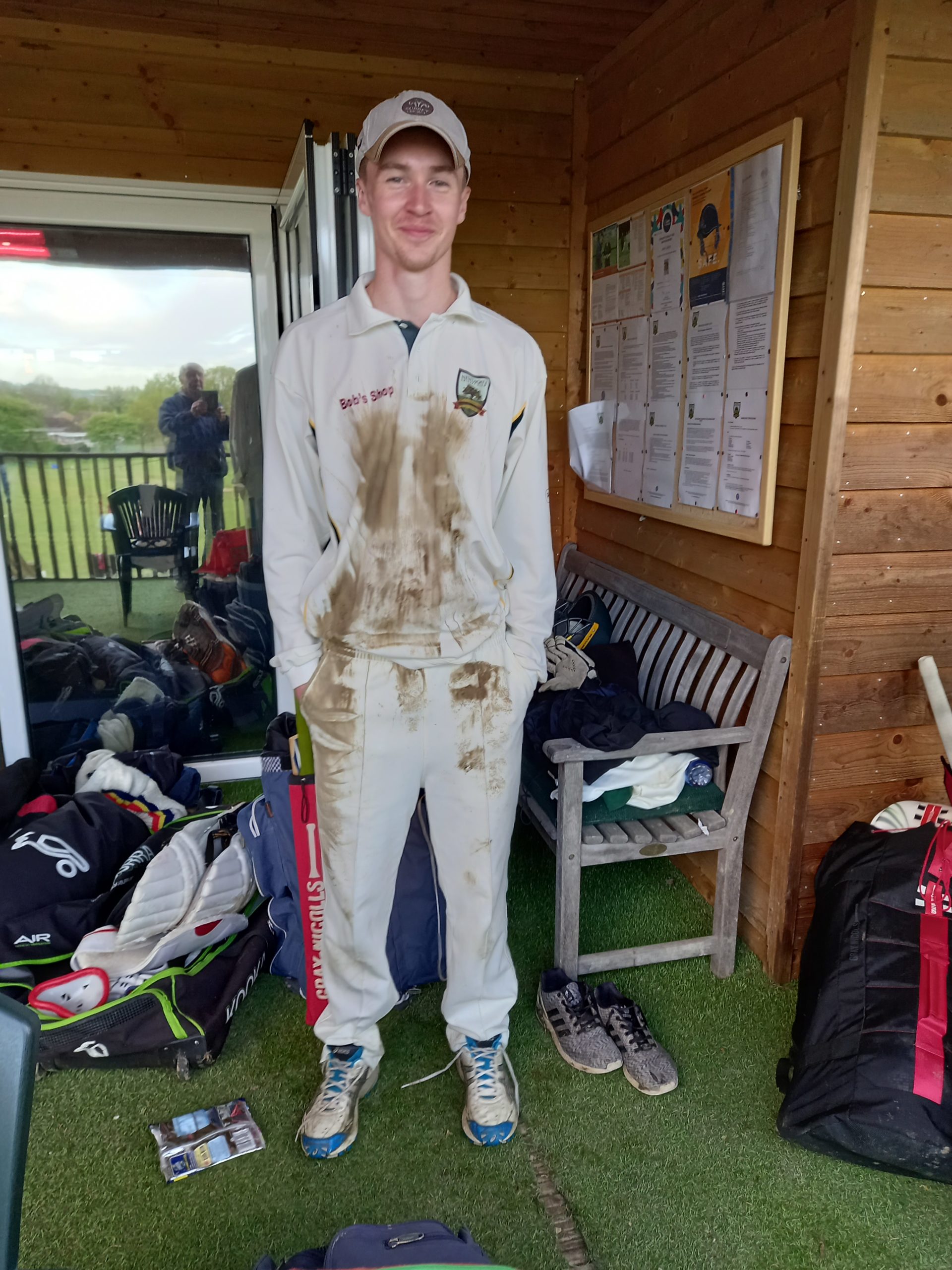 Wednesday, 12th May is a day Thomas Clark will never forget. Playing in an under 15 Surrey Junior Cricket Championship match against Dorking he scored a magnificent 123 not out. A club T20 record. Fantastic!

Our new covers and sightscreen arrived on the 12th May. 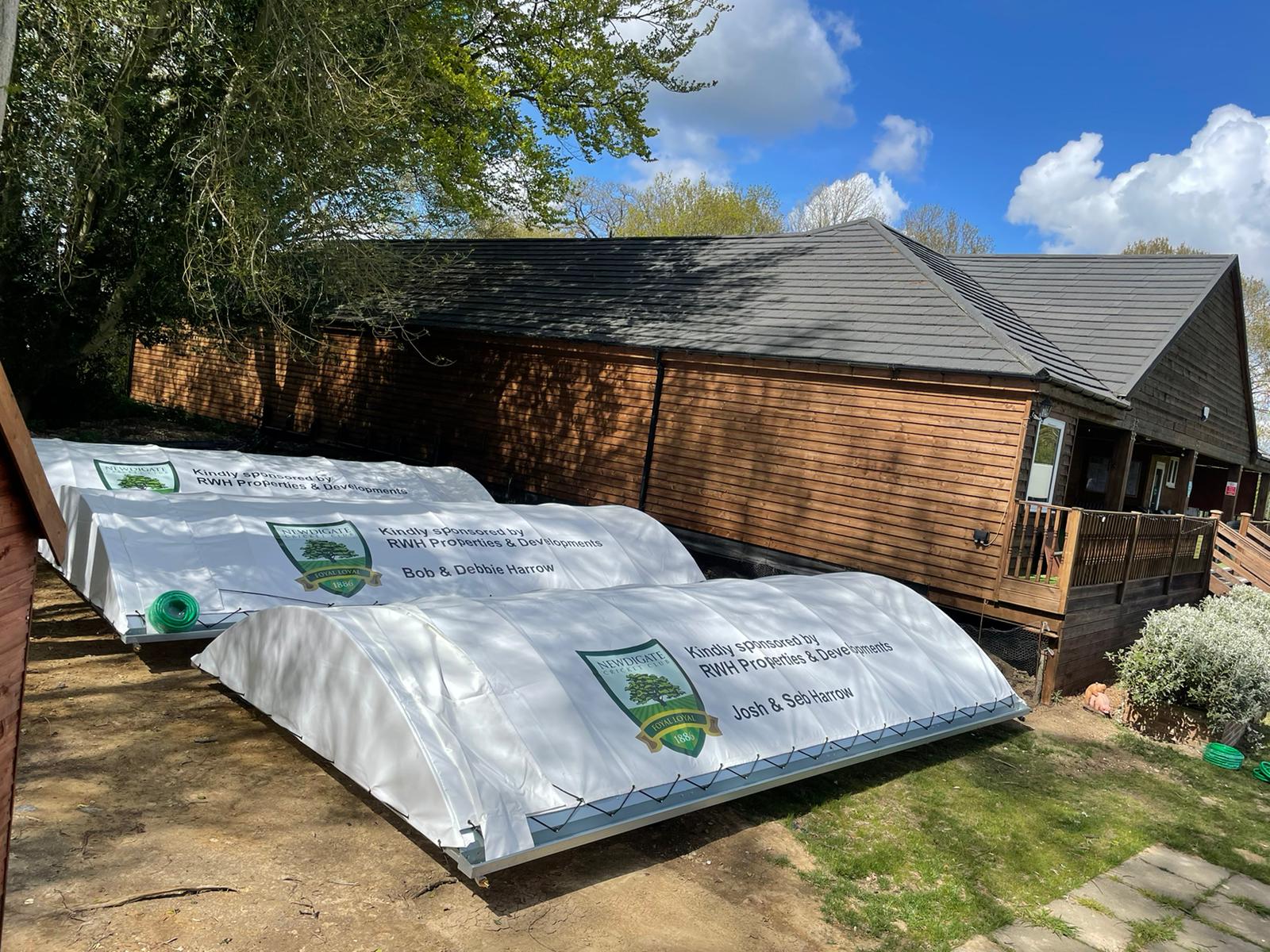 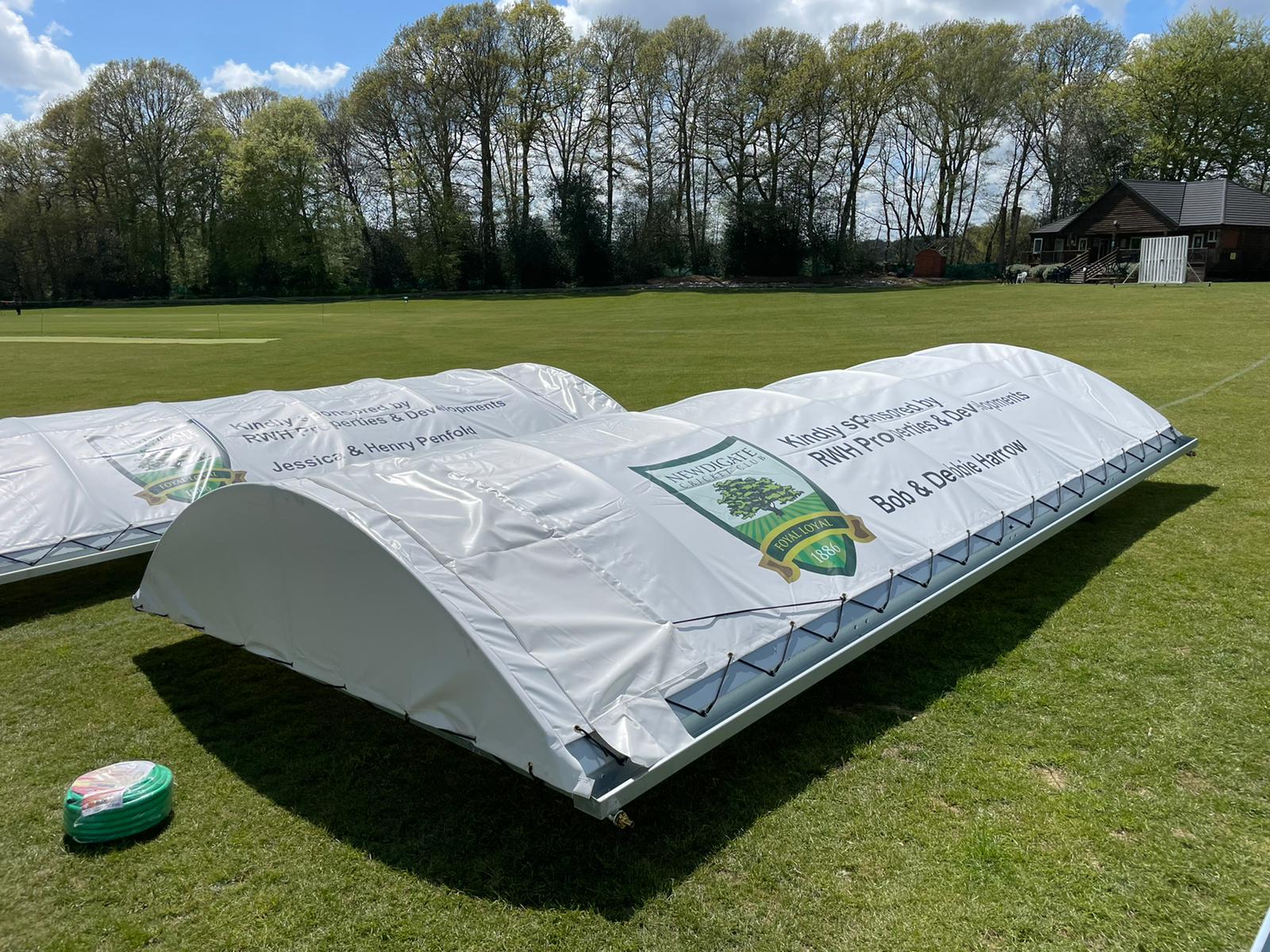 Our ladies played their first Slam match of the season away at Horley’s impressive ground and had a resounding win. See ECB Play Cricket for full details. 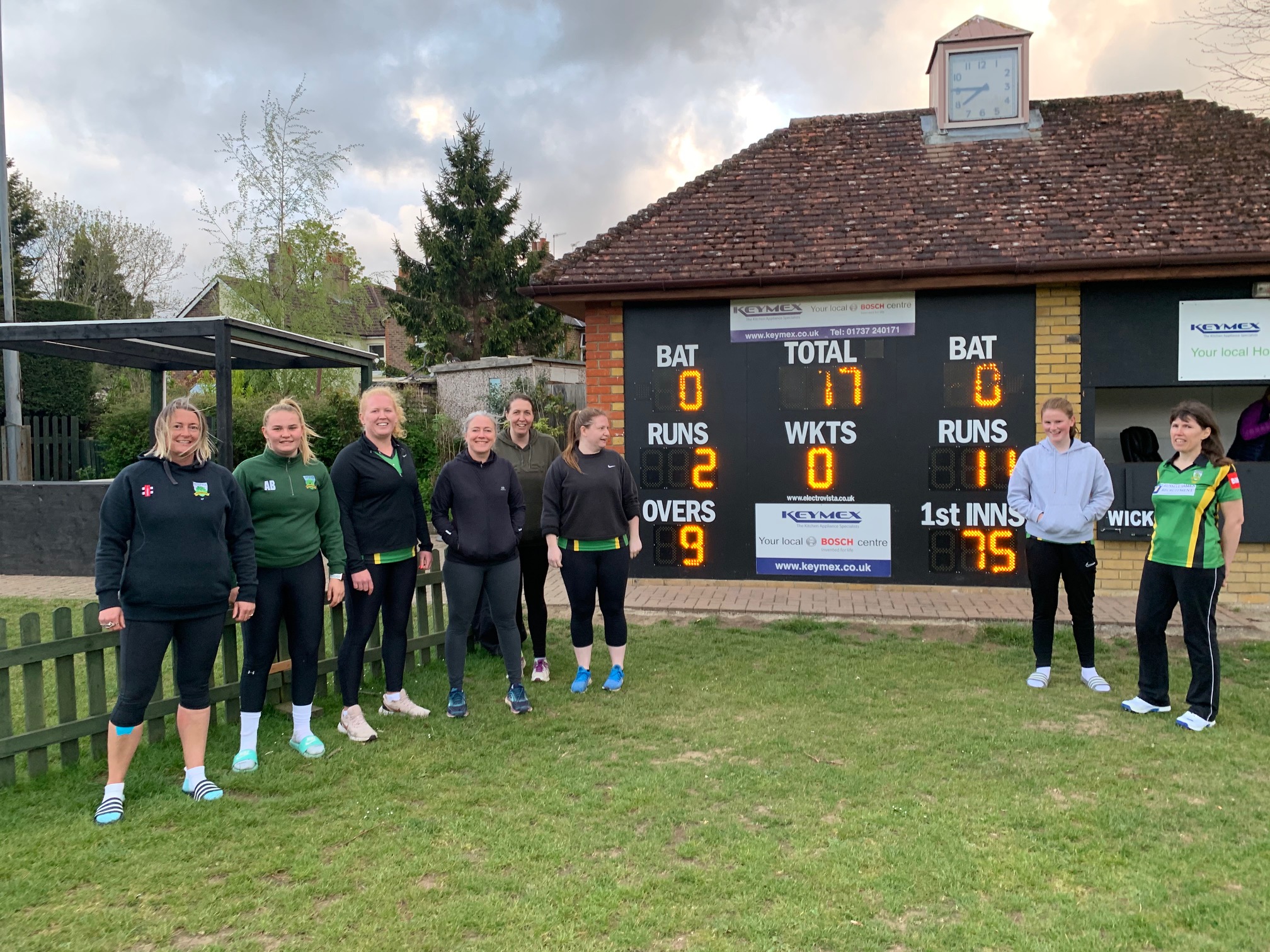 This looks a peaceful enough scene as our under 11s played a league match against Capel. However, the accident book was in full use as three injuries were recorded! This is only their second match using a hard ball – keep your eye on the ball team. 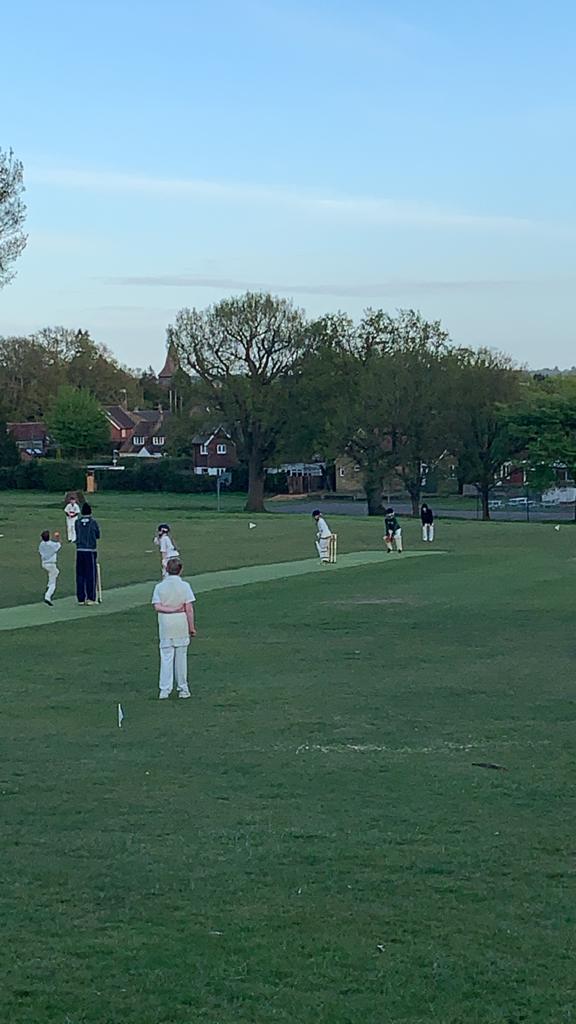 We have just heard that John Jacques, affectionately known as JJ, has passed away. John was dedicated to Capel Cricket Club and he was always a popular figure at Newdigate where he could often be seen umpiring and supporting his team. In 2020 he invited our under 13s to take part in the winter indoor 6-a-Side Identilam league run by Peter Garland. Peter would score and John would umpire. Now neither of them are with us. The under 13s held a minutes silence before their cup match at Capel on the 7th May, the day of JJ’s funeral. We send our sincere commiserations to the Jacques family. 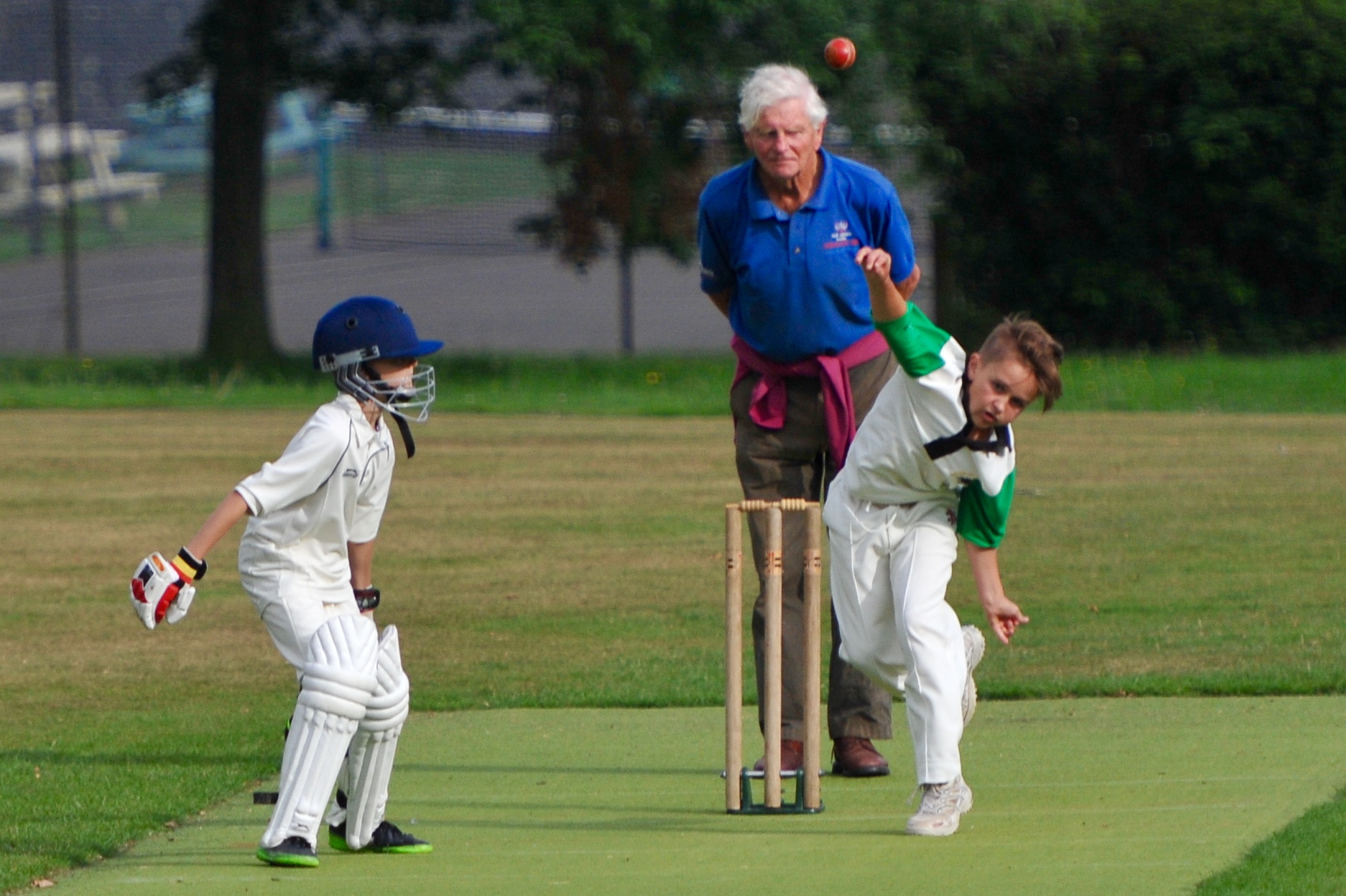 Lots of work going on at the club. The ground has been cleared to make way for the covers and we are very grateful to the Redhill Probationary Service for providing a team to re-paint the outside of the pavilion all under the supervision of Ken Hoather. Do you recognise the old cricket club sign?  – now rubbed down and re-painted. 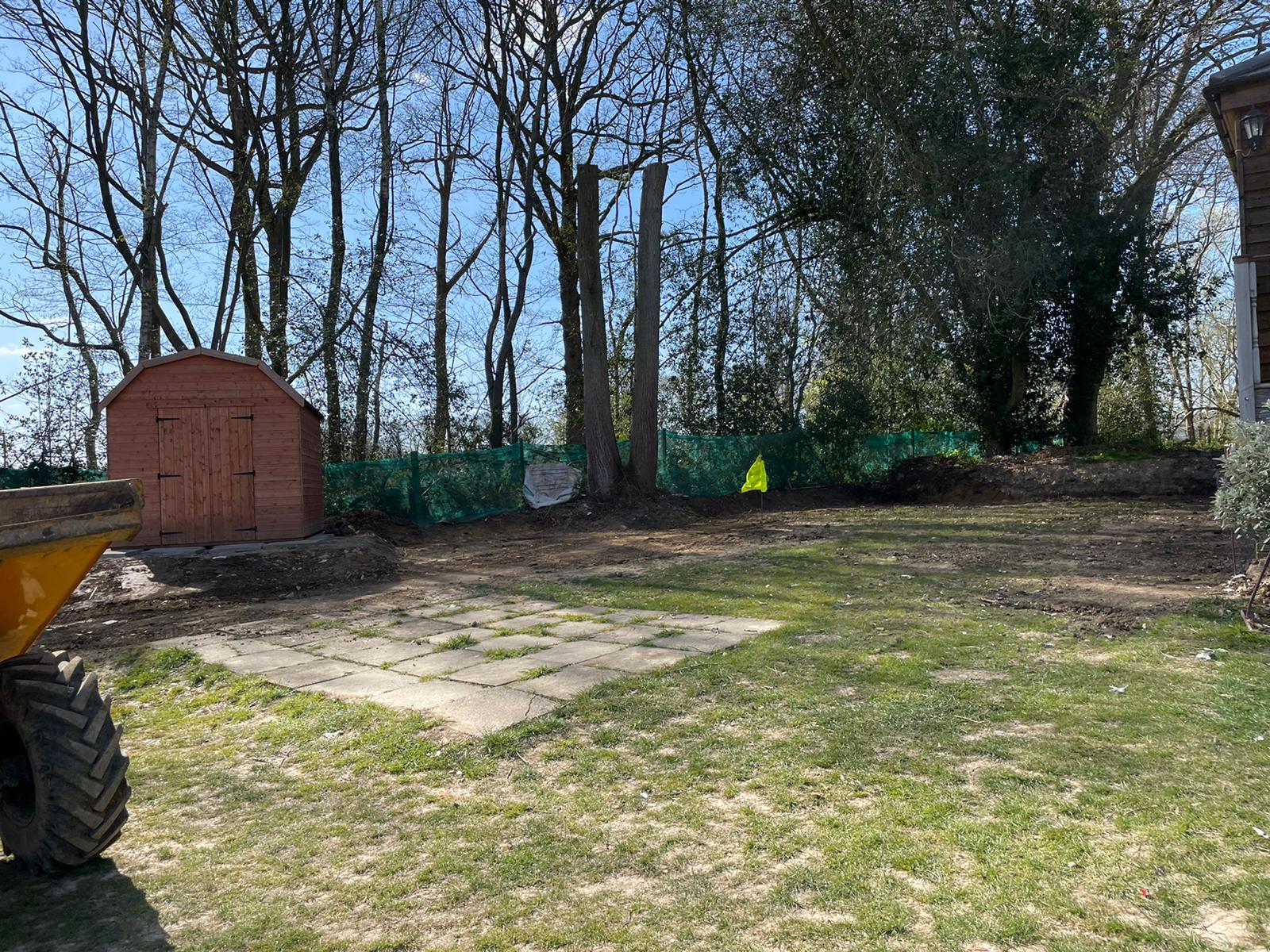 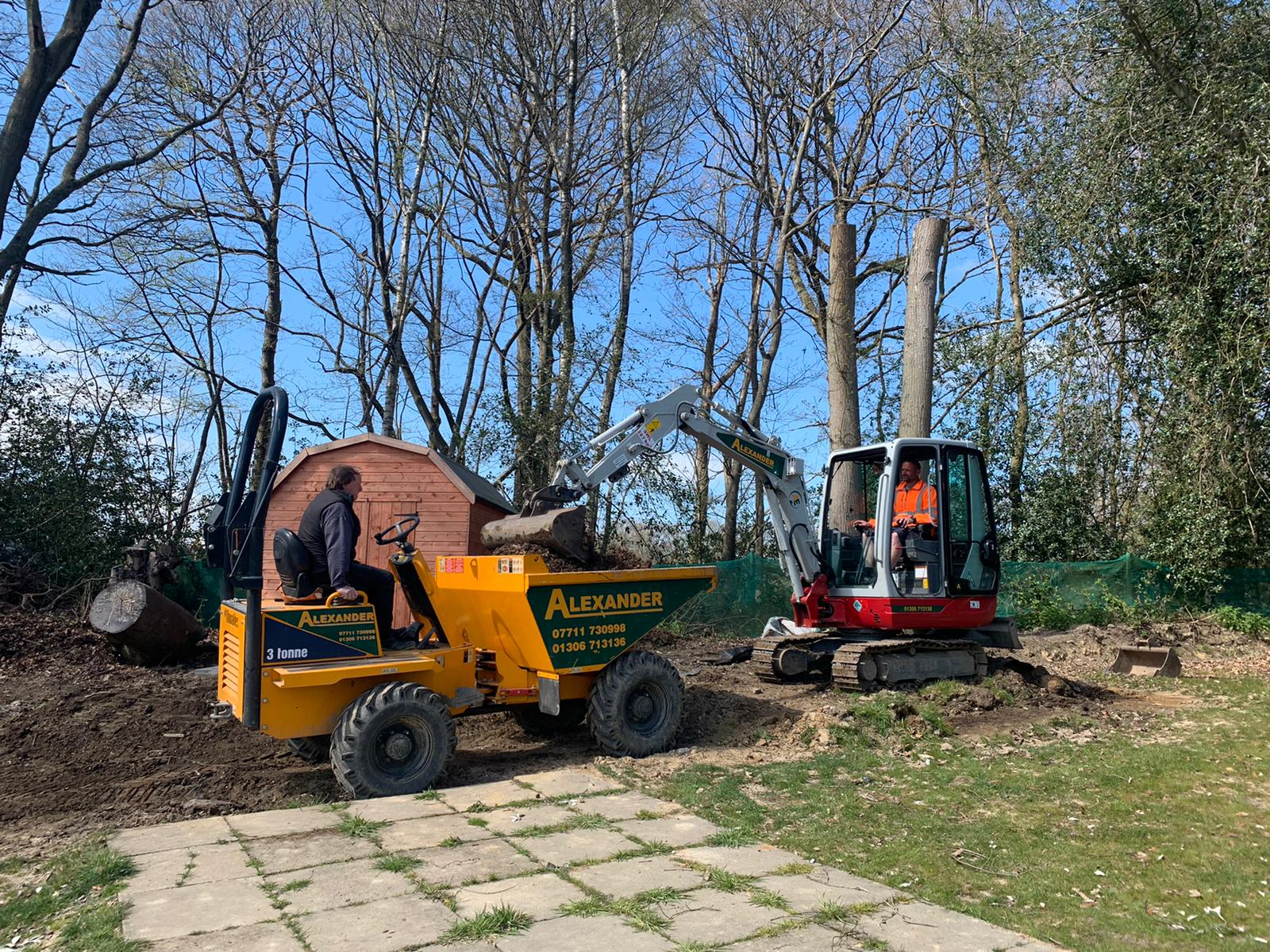 April 16th and junior coaching started for the under 9s and 11s.

6th April – The temperature has fallen and it is snowing. What are our ladies doing? They are training in the nets – a really hardy lot.

The outfield was deep-seeded on the 30th March and the outfield is looking good.

On the 22nd/23rd, March Derek returned and harrowed the outfield to lift the moss and thatch. He then collected all the debris with a special attachment.

On the 9th March, Derek came to the ground to scarify the outfield. The day before the outfield was cut for the first time this year and the grass collected. All done in bright sunshine before storms are expected.

32 people attended the club’s ‘zoom’ AGM on the 5th March. The committee was re-elected and Graham Capel and Roger Bailey were made Vice Presidents. Bill Turner did the grand draw for the Centurion Club and James Turnbull won the jackpot of £200 which he kindly donated back to the club.  President, Andrew Major, presented his President’s award for the second year in succession to James Penfold.

Spring is in the air. On Sunday 21st February a small group of members, all socially distancing, got on with some jobs in preparation for the new season. The fencing around the square was taken down, accumulated leaves removed and the long grass cut. Leaves were removed from the bund and areas re-seeded. The nets have been partially prepared but there is still more work needed as we ran out of cable ties!

Not surprisingly the Russell Haigh Bursary has been cancelled until further notice. Due to Covid restrictions the Surrey Cricket Centre is closed.

Following all the rain the ground is now looking pretty sodden.

24th January – what a difference a few days make! 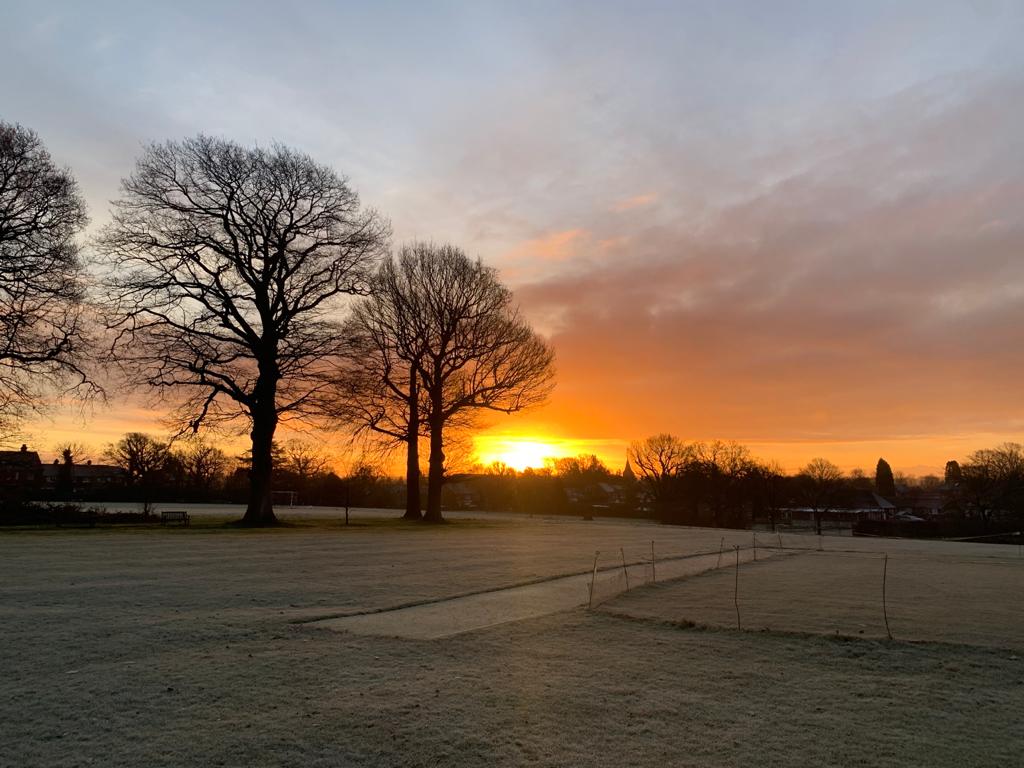 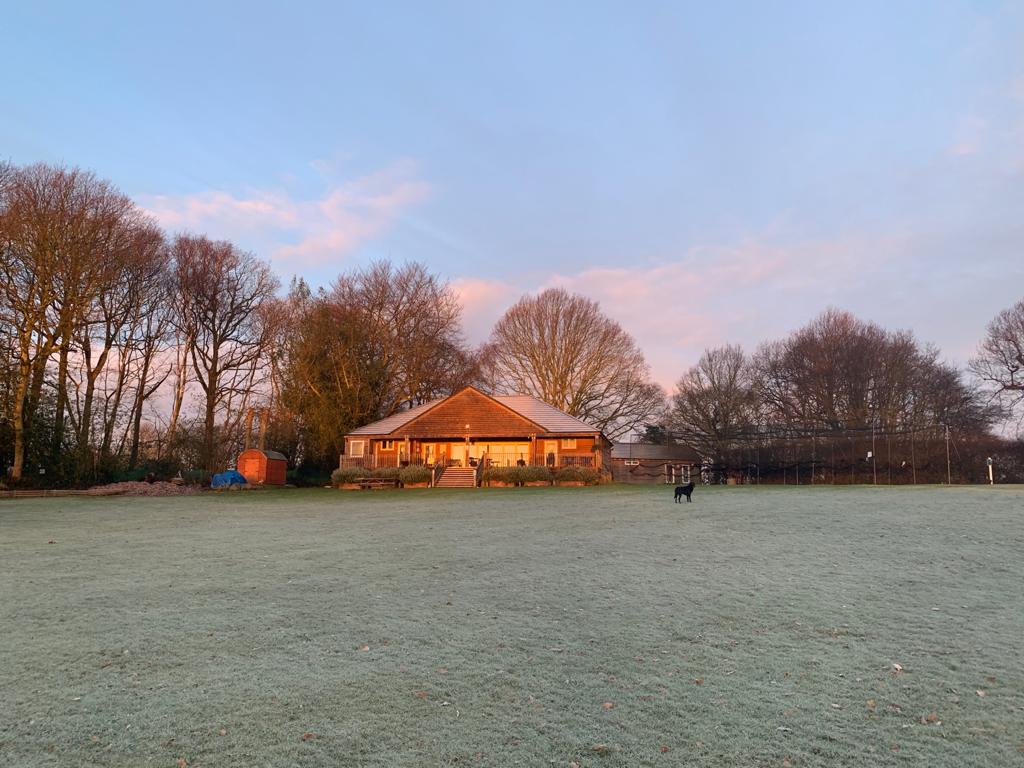 Our entries to the Surrey Junior Cricket Championship have been accepted for 2021. We have registered the following teams (home matches in brackets). Under 9s (Saturdays), Under 11s (Mondays), Under 13s (Sundays), Under 15s (Thursdays) and the Surrey Trust Development League (Sundays pm). Our registration with All Stars Cricket has been processed.

On the 6th January Mike Atherton wrote an article in the Times about the excitement of getting a new bat. He wrote quite a long piece about the bat manufacturer Montague Odd of Sutton and showed exactly the same picture of the workshop that I put on the wall of the corridor in the pavilion. I saved up my paper round money and bought my first bat from Montague Odd – a reblade (which is behind the bar). I dropped Mike a line about my memories and I got a reply almost by return which was very nice. My Dad, Wally Callcut, along with two helpers ! ran a cricket coaching scheme at Cheam Village Warriors CC during the fifties and sixties for over a hundred youngsters of varying ages. He used to run parent’s evenings at the end of the season and invited Alec Odd with his collection of ancient cricket bats and Surrey cricketers such as David Fletcher and Arnold Long.   JC