This has been the most dispiriting seasons in living memory due to appalling weather throughout the summer. We had a total of 107 boys and girls who registered (compared with 103 in 2011). A third of the Monday training sessions were cancelled due to wet weather which completely disrupted training schedules and lead to disinterest amongst players and parents. This also has a knock on effect with bar takings being down by 50%. We were more fortunate on Tuesday evenings when the girls only had one cancellation. Our player/coach ratio was about 4.5:1 – this is not an exact figure, because the week when I was away not all the registration sheets were completed, but it is pretty accurate. 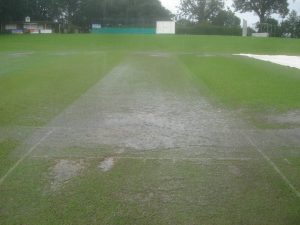 During the spring and early summer I presented courses to y5 & 6 girls at five Dorking primary schools and an introduction course for y1 & 2 at Newdigate Infants. The courses came under the Chance to Shine scheme and were for at least six weeks duration and as a result we were able to start a fledgling u7 group and a regular girls group. 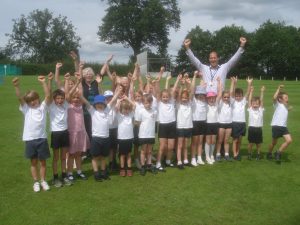 We had a number of issues that cropped up unexpectedly once the season had started.

The football club, without prior notice, said that we could not put the Flicx wicket down on the football pitch. For the past three years we have had an arrangement that we put the Flicx down and in return we would keep the football pitch cut throughout the summer. Needless to say we did not cut the grass so by mid June it was totally unsuitable for our soft ball activities for u7 and u9s. We now have a Flicx wicket, worth over £1500, which we cannot use!

In the spring the following players attended the Russel Haigh Bursary at the Surrey Cricket Centre – Nicholas Duncan/Ben McKenzie (u9), Lucas Woolley/Oliver Quigley (u11), Oliver Turner/Oakley Wheeler (u13) and Alex Miller/Jack Wyllie/Ivan May-Jones (u15).

Football tournaments in May and June meant that we had to concede weekend junior matches and we understand that in 2013 there is going to be a rugby event as well. Now, it would be nice if parents simply said – ‘can’t play it’s the cricket season’. Unfortunately this doesn’t happen and football and rugby take priority. It is a league rule that if a team concedes three matches then they are ejected from the league. The rationale behind that is that conceded games are not fair on opponents, not fair on players who are keen to play cricket and not fair on the coaches. I am not sure of the solution and we have a league meeting in November when this subject is high on the agenda.

During the winter I am hoping to gather the coaches together to discuss our basic training techniques. We are witnessing a number of players who are developing and are just not playing straight, so perhaps we may have to look at more ‘old fashioned’ coaching. A point for discussion.

As usual we are indebted to all our coaches who spend many summer hours organising training sessions and matches – without them we would not have a junior section and I know how difficult it has been in 2012.

Here are the reports for each age group:

Women’s cricket is growing rapidly in popularity and by running the Chance to Shine scheme at St. Paul’s, St. Martin’s, the Weald, North Downs and St. Joseph’s we created a lot of interest, so we decided to set up a dedicated Tuesday evening training scheme run by Nigel Spreadbury, Paul Griffiths and John Callcut. Most evenings there were about 15 girls and towards the end of the season we moved from soft ball to hard ball. The girls represented Mole Valley at the Surrey Youth Games and won the gold medal by virtue of excellent team work and tactical awareness. During the summer they played in the Surrey Club’s Girls Cricket Competition at Caterham, Epsom and Dulwich and performed well against some pretty good opposition. In August a group of our girls attended a summer training camp at Purley CC and had some coaching from two members of the England ladies cricket team. The group has been nominated for the Youth Team Award which is being run by the Surrey Advertiser Group. 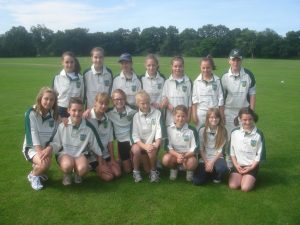 Under 13 girls at Dulwich

As a result of the Chance to Shine initiative we were able to start an under 7 group. We had ten registrations and over the season they learnt batting, bowling and fielding skills under the tuition of Caroline Clark and John Callcut. 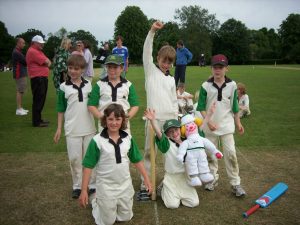 The victorious under 9 side at the Capel 6-a-Side 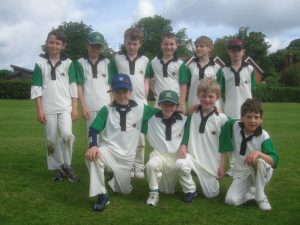 Cup – Won 3 and lost in final to Horley.

A season decimated by the weather culminated in the League Cup Final where our boys were unfortunate to be at the wrong end of yet more rain and poor light – we look forward to our encounters with Horley next season as they are undoubtedly the League’s ‘stand-out’ team.

On the positives (& there were many) our squad won 7 out of 8 matches playing with excellent teamwork, spirit and leadership from Jack Duncan & Morgan Hamilton. They enjoyed first class Monday evening coaching sessions lead by Paul Griffith (including one by ex England & Surrey fast bowler Joey Benjamin) & benefited greatly from a new initiative at this age level – hard ball net sessions on a Friday evening. Individually – while unorthodox at times Joe Haynes improved most with the bat, hitting effectively to top score with 108 runs. The pick of a number of strong bowlers this season was Lucas Woolley, swinging the ball away & on a good length he regularly acquired both League & Cup wickets.

Whilst the season’s highlight was probably our (long) day  in Canterbury playing a friendly in the morning followed by ‘hospitality viewing’ of Kent 2nds in the afternoon this coach will not forget Adam Moon’s sweep for 6 when requiring 3 runs to win off the last ball during our fun 6-a-side tournament at Capel!

Many thanks to the Woods for scoring & all parental help during the season. 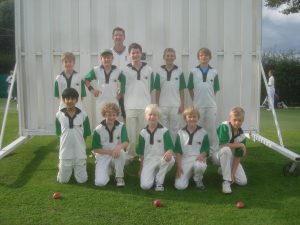 On the bright side I think we gained more support from the parents of the boys who would not normally get to play in matches had we played our strongest side at U13 level and I think they will come back next year.

Positives from this season I think are Oli Turner’s continued improvement as a cricketer. Jack Butler I thought did well as captain considering he had a weak side to captain. I think Freddie Edwards will be a decent player when he moves up the age group. He has sound technique both as a batsman & a bowler. Oli Margetts showed promise after joining us late in the season.

The following need some help in improving their cricketing skills. Frankie Shipton’s bowling action needs to be modified. Others worthy of mention are Oakley Wheeler who I think has improved his bowling but needs to work on his batting. Joe Teague is again someone who I think has improved his game but needs to concentrate on his bowling a bit more. Maybe winter nets may help? Tom Quigley needs to sort out his run up. He could benefit from maybe spending some time with Ross & Paul.

These are just some of the thoughts that I have gathered over the past season. 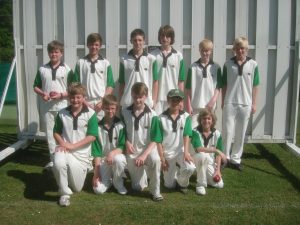 Cup – Lost in semi-final to Sanderstead

This was a season of so near and yet so far with Sanderstead and a lack of availabilities proving to be our nemesis. In a rain affected season we won division B without losing a match. The play-off against division A winners, Sanderstead, was scheduled for the 26th July but we only had three players available. They very kindly agreed to rearrange the match and at 18-3 we were in a strong position and then down came the rain. Another date was fixed but they couldn’t raise a side so we finally played the match in early September but again we were under strength. We put up a good show, with George Warne and Olly Turner playing key innings. They got the runs with one over to go but they only lost one wicket and that was to a run-out. In the cup, we lost in the semi-final to, you know who – Sanderstead. We were invited to represent the East Surrey Colts League in the County championships at Beddington CC. Once again we were under strength and were well beaten by Spencer before the rains fell and the day was abandoned. We also entered the 8-a-side NEC Cup which was also played at Beddington. After being thrashed by Dulwich we had good wins against Tadworth and Beddington and got through to the semi-finals where we lost a close game to Old Midwitgiftians. A number of members of this team have made the step up into senior cricket and they have good cricket careers in front of them. 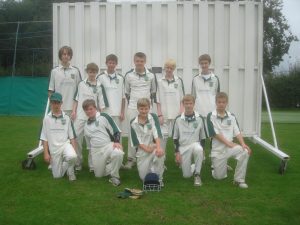 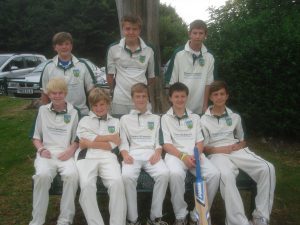 U14s at the NEC Cup at Beddington

Having come within a whisker of winning the league in 2011 we had a special request to continue this team for one more season in the hope that they could emerge as champions. We were delighted to receive sponsorship for this side from the Dorking Deepdene Rotary Club who provided a smart set of shirts. In the event entering a side in the league was an ill conceived notion as Craig Jones was presented with a near impossible job to raise sides due to lack of interest and availabilities. We had to drop out of the cup and we lost the three league games we played in. This was extremely disappointing and did not put Newdigate in a good light at all. 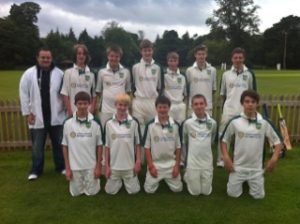 As part of the Olympic legacy we signed up to the Sportivate scheme through Sport England which was designed to encourage young people from 14-25 to participate in sport. This was a complicated scheme whereby we had to register as many players in this category as we could and estimate the number of sessions they would attend. Based on previous years we presented figures and we were granted an award of £850. We explained the scheme in detail and twenty young people signed up. We had to do a weekly report through a specially designed portal and as the weeks passed it became clear that attendances were well down, so much so that our award in the end totalled just over £200.

…………………We entered the Dennis Jacobs Cup and lost in the first round to a strong Reigate Priory side.